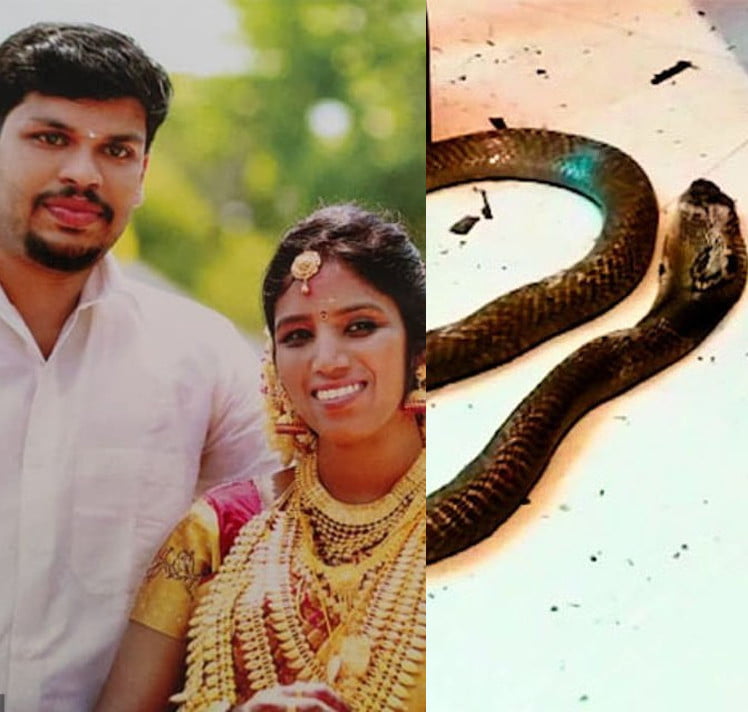 According to a report confirmed by the Indian Police, a middle-aged man whose name is identified as Sooraj has murdered his wife at her parents’ abode following previous attempts which made her flee her marital home.

Naija News understands that the man who is only 27 years in age had attempted to kill his wife at his house a few months ago after he reportedly released a viper into her room. She, however, survived the serpent’s strike as she was treated at a hospital.

Confirming the unpleasant incident, the Kerala Police command disclosed the young man has been arrested for his cruel act of releasing the deadly snake on his wife, leading to her death.

It was reported that Sooraj has been relating with serpent handlers over the phone and had also been given his time to study how serpent bites via internet videos.

“Sooraj got hold of a highly venomous Russell’s viper in March and released it into her bedroom. The viper bit his wife Uthra and left her in hospital for almost two months,” Police official, Ashok Kumar stated.

The police statement noted further, saying “After she was discharged earlier this month, she moved into her parents’ house to recuperate. Sooraj made another attempt on her life while she was at her parents’. He obtained a cobra from a snake handler and threw it at his sleeping wife.”

Ashok added, “Sooraj stayed in the same room as Uthra as if nothing had happened. He was going about his morning routine the next day when he was alerted by Uthra’s mother’s screams.”

“They took her to the hospital where the doctor said she had died.”

Naija News learnt that Sooraj’s action for killing his wife who bears him a child was linked to the fact that his wife hails from a very wealthy background and that their marriage’s dowry includes nearly 100 gold coins, a new car and some 500,000 rupees (around $20,000) in cash.

According to the police, “Sooraj feared that divorcing Uthra would mean giving back all the dowry. That’s when he decided to kill her,”

His motives were, however, revealed after Uthra’s parents got wind of his moves to secure ownership of his wife’s property just a few days after he had murdered her.

In another development, Naija News reported that a former Director-General of the Imo Broadcasting Corporation (IBC), Theophilus Okere, allegedly stabbed his wife to death.