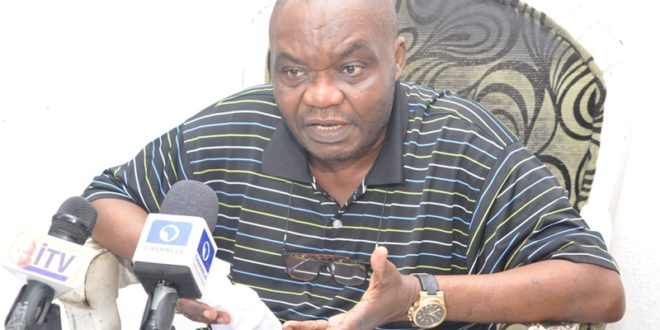 The interest of stakeholders of the All Progressives Congress, APC, in Edo State on the mode of primaries adopted for the state's next gubernatorial election has been rejected by some strong members of the party who alleged that the mode of election will ruin the party.

Naija News understands that the APC chairman in the state, Anslem Ojezua, in a recent statement submit that indirect mode of election will be a better system of election to embrace most especially at this time that the outbreak of COVID-19 pandemic has brought the countries of the world, Nigeria inclusive on its knee.

According to Anslem, it would be unethical to adopt another system of election other than the indirect at this time.

On his part, the former Commissioner of Information, Charles Idahosa, in a recent interview with newsmen alleged that roles of the former Edo State governor, Adams, Oshiomhole as regards the APC in the state will demoralize the party just like he had done to other states.

The APC chieftain revealed that Oshiomhole's move is to ensure that the state governor, Godwin Obaseki lost his position even though he is appreciated by many.

Speaking on the issue of mode of election to adopt for the state's forthcoming primary, Charles said, "On the issue of direct or indirect primary, it is very clear that primary is a domestic issue of a political party. There is a Supreme Court judgment on that. I think Oshiomhole is just out to do a lot of destruction just like he did in Zamfara and other states. What surprises me most is that all the leaders of the party are just wait­ing for him to destroy the fabrics of the democracy of APC. Why they are doing that, I don't know."

He added, "When people try to change the story to suit them, it is very painful. Ev­erybody is aware that on the issue of Edo state, Oshiomhole is a principal actor, in fact, he is an interested par­ty in this matter."

"He wants Obaseki out at all cost even though the wider majority believes that the governor has performed well. Oshiomhole was governor in Edo state when Obaseki contested the governorship primary in 2016. The method used was indi­rect primary and it was held at the Ogbeh stadium, supervised by Osh­iomhole himself."

"I remembered then that the people with Oshiomhole now were abusing him, telling him that he was influencing the outcome of the primary because he wanted Obaseki to win. There was no COVID-19 then but he used indirect primary. Why he is now calling for the direct primary at a time we are all trying to stop the spread of coronavirus in the state?

"Odigie-Oyegun has spoken and he advised that Oshiomhole should ex­cuse himself. As national chairman of the party, Oyegun never supported Obaseki but he did not interfere in the process; he did not disturb Os­hiomhole from doing whatever he wanted to do then. So, what is it that is so special about Oshiomhole that nobody wants to stop him?"

When asked why he was not confident in Oshiomhole handling the state primary election, Charles stated, "The situation has been revealed to us by the Deputy National Chairman (North), Lawal Shuaibu who said last week that Oshiomhole person­ally constituted both the screening committees for the governorship and senatorial elections, as well as the final appeals committee, all in vi­olation of the extant constitutional provisions of the party vesting the power in NEC. He said Oshiomhole also made himself the chairman of the appeals committee so that he can have the final say. I repeat, we are not afraid of direct or indirect primary, but we are concerned about fairness."

"If Oshiomhole is allowed to be a judge in his own case, there will be no fairness. That is all we are saying. Oshiomhole should excuse himself from the primary in order to ensure justice and fairness. That is our position. We will not fold our hands and allow Edo to go to the op­position like Oshiomhole is doing. That was how Oshiomhole harassed Governor Samuel Ortom until the man left APC and contested under PDP."

He reiterated, "We are tired of Oshiomhole's lies and deceptive antics. A few days ago, he was asked what his problem with Obaseki was; he said he has no problem with the governor and the only wants him to carry everybody along. Meanwhile, he was busy or­ganising mock primary that later resulted in violence. As a former governor, he is not concerned about assisting the Edo state government in finding a solution to COVID-19 pan­demic in the state, all he is concerned with how to deny Obaseki a second term. We are waiting for him. Let's see how that is going to be possible."

Meanwhile, the governorship primary of the All Progressives Congress in Edo State has been slated for June 22, 2020, Naija News report.