Home » Gist » Video: A Lady, Others Beat-Up ‘NEPA’ Staff For Attempting To Cut Their Light 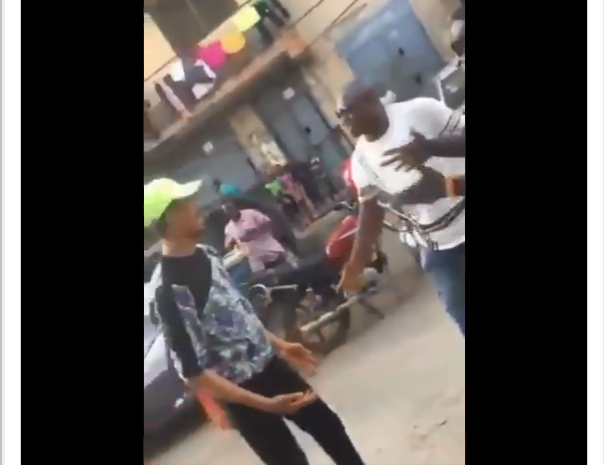 Angry residents of an undisclosed location in Lagos State have dealt with some staffs of the Eko Electricity Distribution Company, EKEDC, given them the beaten of their lives after they attempted to cut their light.

In the video, one of the NEPA staffs, as popularly called was seen climbing up a ladder to cut off cables that supplied power to a building. He was, however, restricted by a lady and some set of people who stood up against the action.

According to the lady who was on an Ankara top and jean wear, they have not been enjoying power supply in the area and now they want to cut the same poor light they have been managing.

She was shouting on her voices threatening the guy on the ladder to come down.

Eventually, the drama gets tough and the residents began to pounce on the NEPA staffs.

Watch the video below as shared by @Gidi_Traffic.

"@MikeHell7: The Moment NEPA officials got the beating of their lives. @Gidi_Traffic

This #Covid_19 season, try not to aggravate Citizens.

They should've been more considerate pic.twitter.com/v3zAaKeIz2

Naija News recalls that about two weeks ago, residents of Baruwa Estate in the Ipaja area of Lagos State expressed disappointment over the decision of the Ikeja Electricity Distribution Company (IKEDC) not to supply the area with electricity.