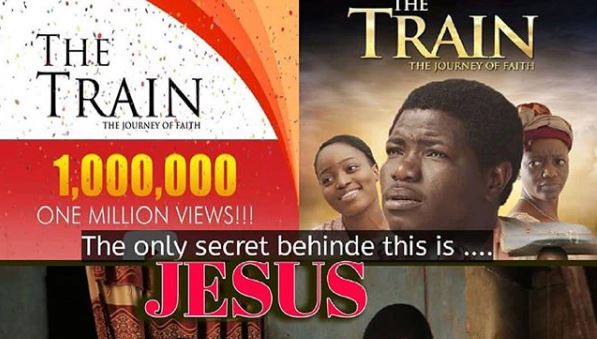 Naija News recalls that Mount Zion Drama Ministry released ‘The Train’.two weeks ago as the movie reveals the Biopic story of Popular Nigerian Drama Televangelist, and the visioner of the ministry, Mike Bamiloye.

‘The Train’ is coming in after Mount Zion released the third season of one of their most successful movie, Abejoye (My Defender) which became a hit in March 2020. (the train mount zion cast)

‘The Train’ since its release on Damilola’s official Youtube channel on 3rd May, 2020, became a hit receiving great traffic on all social media platforms.

Speaking on the achievement movie, Damilola Mike Bamiloye via his Instagram page wrote

WHO DID IT.. JESUS OH MY GOD One million views within 15 daysDespite the pandemic lockdown season
And it’s an 100% Gospel and Nigeria movie.Even at least we can assumed a million testimonies because in Nigeria we used download and sharing all around.The only secret behind this achievement is Jesus
To God be the gloryHallelujah

SOMEBODY SAID #THETRAIN MADE A RECORD OF THE FIRST NIGERIAN MOVIE TO MAKE THIS RECORD. 1 MILLION VIEWS IN 15 DAYS! TRENDING AS NUMBER 1 for 2 WEEKS!