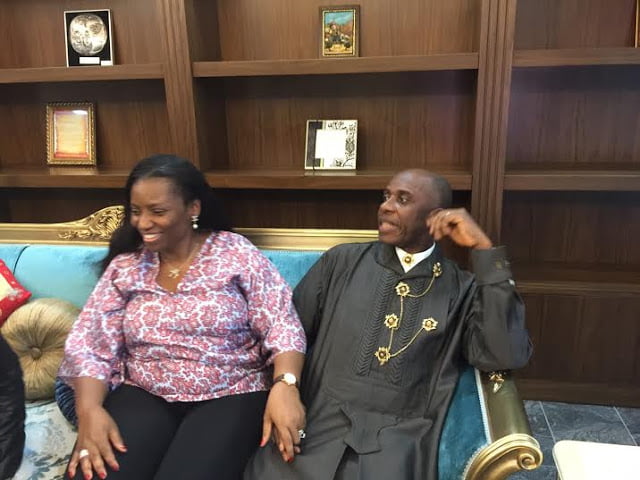 Nigeria’s Minister of Transportation and former Governor of Rivers State, Rotimi Amaechi has disclosed how he met his wife and they eventually got married.

The Minister who is also a former Speaker of the Rivers State House of Assembly, as well as a former two-term Governor, noted that his wife once gave him a wrong address when he first met her.

According to him, he first met the lady who eventually became his wife at a friend’s wedding where she was the chief bridesmaid.

Amaechi disclosed they exchanged addresses at the event but the address she gave him led to a toilet in the university.

He narrated that he forgot about her after the incident until they met again later in the future and they picked up from where they left things initially.

He made the disclosures while speaking in a recent interview with Punch.

In his words; “It’s a funny story. We met at a friend’s wedding where she was the chief bridesmaid. We exchanged addresses but she gave me the wrong address. The address she gave me led me to a toilet in the university. I forgot about her until I ran into her one day in the estate where I lived in Port Harcourt. We actually lived on the same street but I didn’t know. By then, I was a special assistant to the governor of Rivers State. We began to interact and one thing led to another; today, we are man and wife.”

Speaking on the qualities that attracted him to her, Amaechi noted that his wife (Judith) is extremely beautiful and independent. He added that she is a prayerful person who also respects his parents and family members.

Whenever I’m broke, she usually bails me out because she is always buying and selling things. I even joke with her that I hope that someday I wouldn’t return home and find that she had sold our children.”

“She is also very prayerful. She fears God a lot and that is one quality I admire in her. She was very respectful to my parents and is caring to my siblings. She encouraged me to make sure that all my siblings were educated and today, they all are. She always reminded me that my family should also enjoy the kind of benefits I got. Even when I told her I had no money, she would ask me to borrow from her and pay back when I had. Most times, I never paid back. Basically, it’s a huge family managed by her.”