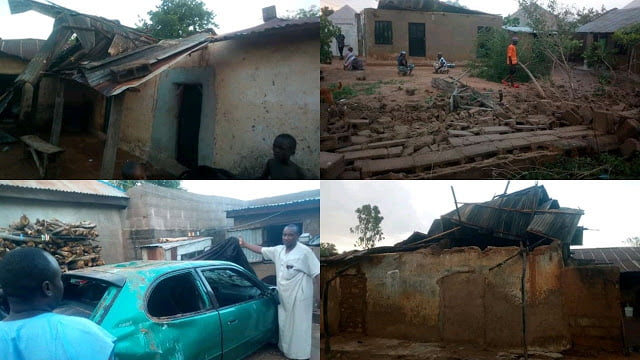 Residents of Ganye, a community located in the Southern part of Adamawa State, Nigeria, have been left homeless and in total blackout following a heavy rainstorm which drastically ravaged valuables, including their houses.

Reports have it that a heavy downpour of rain which lasted for half an hour swiped off structures (houses, schools) including electrical poles among others.

Naija News understands that wind and rainstorm which happened in Ganye on Tuesday night also dent a newly purchased car by a resident.

According to the Information Officer of the Ganye Local Government Area, Kabiru Njidda who revealed the incident via a phone conversation with a media correspondent, electric cables and poles, school structure, house roofs and others were all ravaged by the storm.

Njidda added that the LGA, most especially the council headquarters, Ganye town, had been thrown into a blackout following the incident which has left many homeless.

“There is currently no light. We’ve contacted officials concerned but the best we can expect is that maybe they will effect repairs tomorrow.”

“I have just left a man whose house and a new car was badly affected,” he said, explaining, “the wall of his house collapsed on his car, seriously denting the car,” Njidda revealed.

This is coming a month after Naija News reported that Nothing less than 50 houses at Imeruku Onigari community, Shagari area, in Akure South local government area, have been destroyed by a rainstorm which lasted less than 30 minutes.