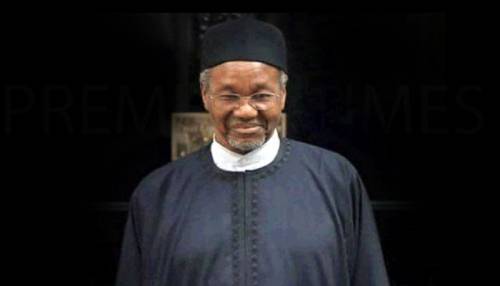 Alhaji Mamman Daura, a nephew of President Muhammadu Buhari and an alleged leader of the presidency ‘cabal’ has reacted to the death of Mallam Abba Kyari, the late Chief of Staff to the President.

Naija News recalls that Abba Kyari, whose death was announced last Friday, had died of complications from the deadly coronavirus (COVID-19) pandemic.

In a tribute to Kyari which was made available to NAN on Friday, Mamman Daura, said Abba Kyari was a man of uncommon attributes who was blessed with mountainous gifts.

He described the former Chief of Staff as a man with uncommon attributes of intelligence, diligence, hard work, loyalty to friends and worthy causes.

Daura wrote: “I remember when I employed him as a Reporter in the New Nigerian, I was surprised when he accepted the only job available which was a Proof Reader.

“He was a man who constantly strives to improve himself and he was fortified for success as Chief of Staff by the rigors of a Cambridge education and varied experiences in Banking, industry, investment and journalism.

“He set himself the task of defining the role, functions and status of the Chief of Staff.

“He started by consulting previous incumbents of the position he could reach as a way of educating himself of the challenges ahead of him.

“I firmly believe that all future Chiefs of Staff would be judged by the benchmark of Kyari.

“Kyari was an exacting taskmaster and his staff were relieved if he travelled outside the country, but they valued, respected, and even liked him.

“He was at odds with many senior members of the government on economic policies because he tended to look inward for solutions and was not an ideologue.

“Despite holding firm views, his advice to the President was dispassionate, even-handed and did not hide unpleasant facts, in the best traditions of public service.

“He was a man who lived a fairly simple life and would habitually wear his shoes to the ground before buying a new pair.

“For us, he will always be remembered with sadness in our hearts and tears in our eyes.”