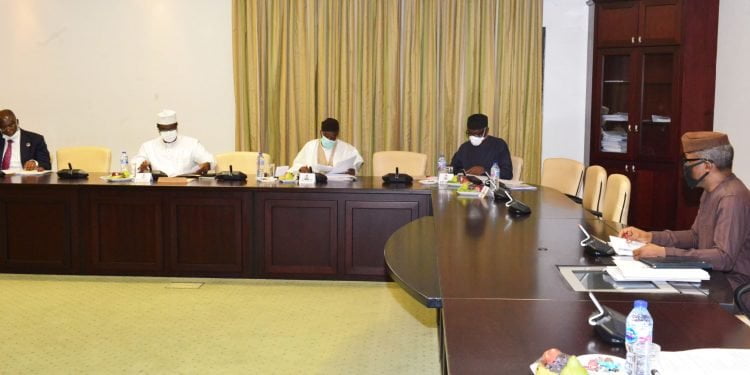 Vice President Yemi Osinbajo has met with the Secretary to the Government of the Federation (SGF), Boss Mustapha, and eight governors on how to tackle the COVID-19 pandemic.

In a post on Twitter on Thursday, Osinbajo’s spokesperson, Laolu Akande, disclosed that the meeting was centred on harmonising coronavirus response efforts by the federal and state governments.

He also disclosed that the meeting which was via video-conference and was held on Wednesday had in attendance the Minister of Finance, Zainab Ahmed and Minister of Health, Osagie Ehanire.

Osinbajo’s spokesperson said: “Late last night, Osinbajo held a video-conference with eight governors from the geopolitical zones on how to coordinate the plans of the states with those of the Federal Government on the management of the COVID-19 Pandemic.

“Secretary to the Government of the Federation (SGF), Finance and Health Minister also participated in the meeting.”

In a related report, Vice President Professor Yemi Osinbajo on Thursday presided over the Economic Sustainability Committee meeting in Abuja.

Those present at the meeting were Minister of Works and Housing, Babatunde Fashola, Minister of State for Petroleum Resources, Timipre Sylva, Minister of Labour and Employment, Chris Ngige among others.