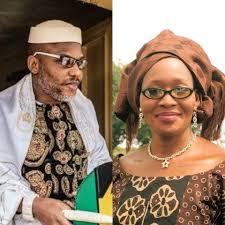 Olunloyo, who wrote on her Twitter account on Tuesday evening, said she would also unveil secrets about the possibility of Kanu being dead and already replaced by a body double as Nnamdi of Sudan.

She said this in her reaction to rumours on social media suggesting Nnamdi Kanu is dead.

Naija News reports the IPOB leader has been pushing the idea that Muhammadu Buhari, President of Nigeria is dead and has been replaced by another person he identified as Jubril of Sudan.

However, Olunloyo has sent social media into a frenzy after her post in which she vowed to unveil some secrets about Kanu amidst rumours that he is dead and replaced by a body double.

#BREAKING Tomorrow I will tell you if IPOB Terror leader Nnamdi Kanu is DEAD⚰️ in Italy and cremated or being impersonated by a Double Nnamdi of Sudan. I’m the only credible Journalist for this???#Kemitalks

Kanu is understood to be in exile after his home country in Afara-Ukwu, Abia State was invaded in 2017 by the Nigerian Army during the Operation Python Dance.