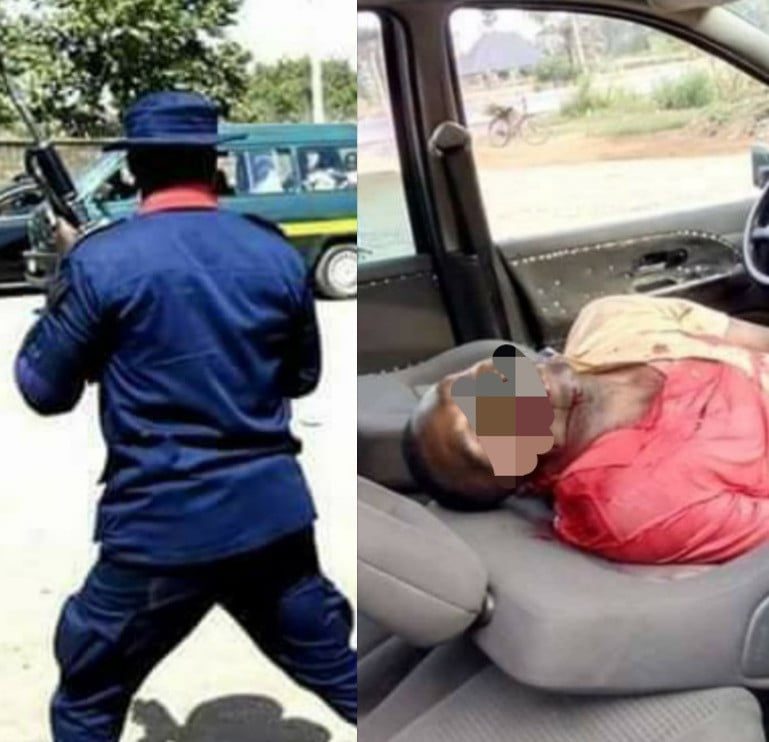 An officer of the Nigeria Security and Civil Defence Corps (NSCDC) whose name is identified as Eke Richard has come under attack by angry mobs in Abia State after he allegedly gunned down a commercial driver who refused him a bribe.

It was reported that the NSCDC officer on Wednesday, April 15 shot dead a commercial driver, Amobi Igwe, at the tollgate area of the Umuahia-Aba Expressway in Umuikea, Isialangwa South Local Government Area of the state.

Locals reported that at about 7:10 am on Wednesday, Amobi was driving through the Umuahia-Aba Expressway loaded in his vehicle with food items, like rice and tomatoes but met his end after the NSCDC officer demanded a bribe from him and refused to comply.

Richard, however, after some argument with the Amobi, alleged to have aimed his rifle at him demanding him to hand over vehicle’s key which he refused again.

At this time the driver was shot as he shunned demands from the NSCDC officer.

Naija News learnt that the Richard, after shooting the driver took to his heels and ran into a police station close by to escape been beaten by some angry mob who ran after him.

However, the Abia state Commandant of the NSCDC, A. C. Nwannukwu, while given updates on the development noted that the claim that the driver was carrying foodstuffs on his vehicle is nothing but a false report.

He alleged that the driver was confirmed to be coming through Ishiagu in Ebonyi State and passed through the Umuahia-Aba Expressway but had refused to stop his vehicle when asked to do so for a check-up.

“Amobi sped off dangerously, skidded over the barricade and brushed the officer with the car,” said Nwannukwu.

He added, “At that point, Richard fired at the vehicle’s tyres, but unfortunately, the bullet strayed and hit the driver, leaving him seriously wounded. He was subsequently rushed to a nearby hospital, where he was confirmed dead.”

On the other part, the Coalition of South-East Youth Leaders called for the arrest and dismissal of the NSCDC officer.

The stated, “We condemn in the strongest term the killing of the driver by the NSCDC operative. We demand the immediate dismissal, arrest and prosecution of the NSCDC personnel and the team that caused the untimely death of this young man, who had a family and children to take care of,” the group said in a statement by its President-General and Secretary-General, Goodluck Ibem and Kanice Igwe, respectively.”

In another news, the Ondo State Command of the Nigeria Security and Civil Defence Corps have arrested a student of the Federal Polytechnic, Ado-Ekiti for allegedly raping a teenage admission seeker, Naija News report.