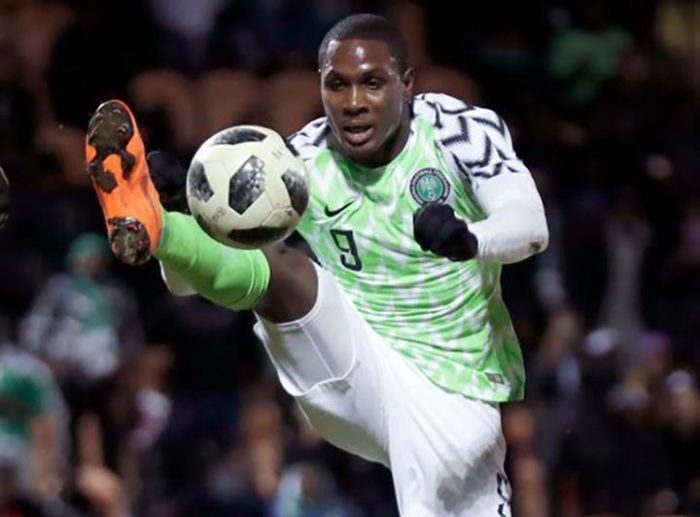 Striker Odion Ighalo has finally spoken about hopes of coming back to the Super Eagles as requested by many football lovers in Nigeria.

Naija News The Manchester striker dashed the hopes of many Nigerians who have hopes that he will reverse his 2019 decision to retire from the Super Eagles after he helped the Nigerian national team clinch Bronze at the 2019 African Cup of Nations (AFCON) tournament.

According to Ighalo, who now plays for Manchester United, the presence of Lille’s Victor Osimhen, who inherited his number nine jersey, and Villarreal’s Samuel Chukwueze are very good examples of why he is not needed in the team and might find it hard rescinding his retirement decision.

“For now I am done with the Super Eagles but in life you can never say never. I am in contact with the coach constantly, four days ago he sent me a message,” Ighalo said to Juliet Bawuah in a Twitter conversation. “I still message him to wish the team good luck before they play a game.“We have young, very good players in the team, the likes of Osimhen coming up scoring goals, Chukwueze – good exciting players.

“I just want them to keep doing the job because they are doing so well. For Super Eagles I want to concentrate on club football for now.”

He added : “The young players coming up are doing very well, I want the fans and country to believe in them, give them the mantle to take up the responsibility to do well.

“I know the coach said the same thing, he wants me to be back because I can nurture the young ones, teach them one or two things, which like I said you never can say never.

“For now they are doing well so I just want the team to keep doing well, I am watching them from afar, supporting them, then we’ll see what the future holds.”

Ighalo concluded by saying he wants to focus on his club career.”Of course Super Eagles is my team, it’s my country and I’ve played there, I know how the setting is there.“The coach gave me opportunity even when the whole world was against me and I came back to play for him and we’ve been talking, we have a good relationship even with the players there. We never had any problems.

“It will be a great opportunity to come back if the opportunity arises. For now I want to concentrate on my club football then we’ll see what happens in future.”