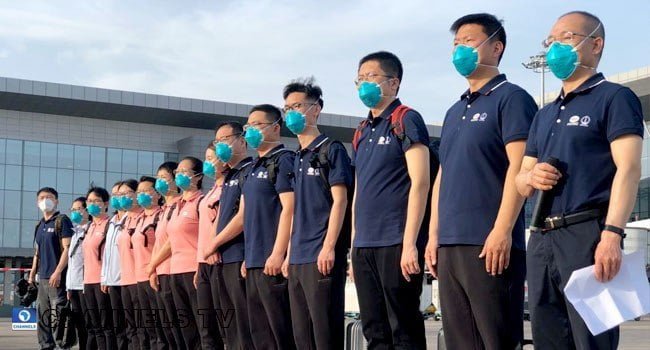 Nigeria’s opposition party, Peoples Democratic Party (PDP), has told Nigerians to blame President Muhammadu Buhari’s led administration should the cases of Coronavirus increases in the country within a few days from now.

PDP’s National Publicity Secretary, Kola Ologbondiyan, in a statement on Wednesday, noted that the APC led administration has shunned the outcry by concerned Nigerians over the invitation of 15 Chinese Experts to Nigeria to help in the treatment of the global pandemic victims in the country.

Naija News reported earlier that a team of medical personnel from China has arrived Nigeria touching down at the Nnamdi Azikiwe International Airport, Abuja on Wednesday.

Reacting to the development, Kola said: “The Peoples Democratic Party, PDP, has charged Nigerians to hold President Muhammadu Buhari responsible should there be any upsurge in the rate of COVID-19 infection and death in our country following the importation of doctors from China, the epicenter of the scourge, by the Buhari-led Federal Government.”

“The PDP is alarmed that President Buhari ignored the protests by Nigerians and professional bodies including the Nigerian Medical Association (NMA) and allowed the importation of the Chinese doctors despite warnings that bringing in doctors from the hotbed of the plague will expose our citizens to further risks.”

The party also noted that there has been an uproar in certain countries where the Chinese medical experts have visited to give helping hand, adding that kits and equipment from the Chinese country have raised eyebrows of individuals following upsurge experienced in places they visited for help.

“This is even as Nigerians across the board have continued to question the status, identity and interest of the Chinese doctors as well as the safety of kits and equipment from China, particularly following scary reports of escalation of the scourge in certain countries reportedly after the arrival of Chinese medical personnel in those countries,” PDP noted.

“Moreover, our doctors and nurses have been on top of the situation with records of recoveries and less casualties, thus raising questions about the real intentions of bringing in doctors from China.”

PDP, however, has alerted and charged the whole world to hold President Muhammadu Buhari responsible for any questionable increase of the global pandemic in the country, adding that Buhari should know that Nigerians already have with them the current statistics of the epidemic before the arrival of the said Chinese doctors.

The party added: “Nigerians are aware that since the index case was reported till date, our nation’s COVID-19 data stands at 254 confirmed cases, out of which 44 have been successfully treated by our doctors with 6 deaths, which reportedly had other underlining ailments.”

Meanwhile, the two major medical doctors associations in Nigeria, the Nigerian Medical Association (NMA), and the National Association of Resident Doctors of Nigeria (NARD) have insisted that it will not allow Chinese doctors to attend to its patients, Naija News report.