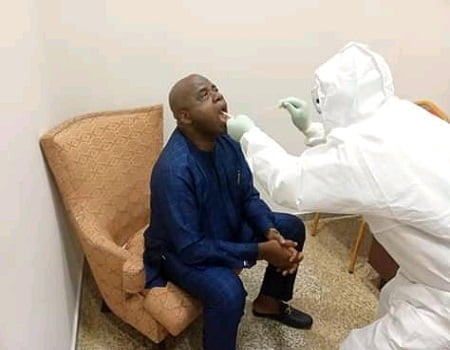 Governor Duoye Diri of Bayelsa State has tested negative for the coronavirus disease after he subjected himself to the rapid diagnostic test for the virus.

The result allays fears that the governor might have contracted the disease after meeting with the President’s Chief of Staff, Mallam Abba Kyari and the governor of Bauchi State, Bala Mohammed, who have both tested positive to Covid-19.

Meanwhile, the governor has directed civil servants in the state on Grade Levels 1-12 to stay at home as part of efforts to curb the spread of the virus.

This move was confirmed in a statement by his acting chief press secretary, Mr. Daniel Alabrah, who added that the governor has also suspended burial and wedding ceremonies across the state.

“The Bayelsa State government has asked civil servants on Grade Level 1-12 to stay at home for two weeks with effect from Thursday, March 26, 2020.

“Only those on essential services such as medical and health workers, fire service personnel, cleaners and other related personnel were exempted from the temporary restriction.

“Also all burial and wedding ceremonies have also been suspended in the state for the same period. The expanded multi-sectoral task force on the COVID-19 pandemic has also reduced the number of persons at worship centres and other public gatherings from the initial 50 to 20.

“The restriction order also affected night clubs and bars in the state as well as commercial vehicles and tricycles that had been directed by the state Ministry of Transport to reduce the number of passengers they carry from 3 to 2,” the statement reads in part.

The statement further echoed the need for prevention and caution on the part of the citizenry by urging them to imbibe regular hand washing and use of sanitisers.