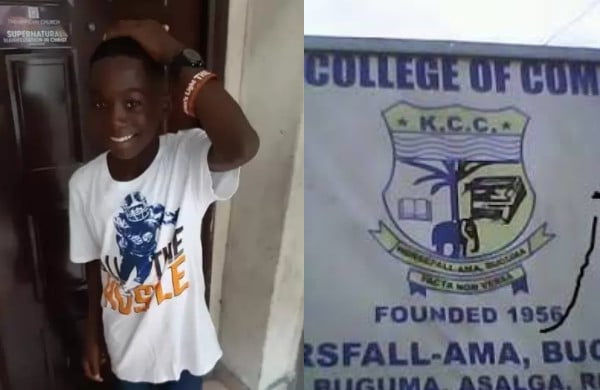 The principal of Kings College of Commerce (KCC) secondary school, Buguma City of Asari Toru local government of Rivers State and his son have reportedly taken to his heels after son’s alleged involvement in beating up his fellow to coma.

This was revealed by a lady identified as Miss Wokoma, who cried out to challenge the management of Kings College of Commerce (KCC) Secondary School, alleged that her nephew died following a gang up by his classmates who beat him to coma for an unknown reason.

According to her statement, her nephew returned home on Friday, March 13, severely dealt with by his classmates, with the principal’s son inclusive.

She further revealed that neither the school principal nor the teachers’ contacted the parent of the child after the incident which leads to the death of her nephew.

She wrote; “Death with so much guts and audacity, invaded our home and snatched our bright shining star away. He was not sick but died to the wickedness of humanity. On Friday last week, his classmates without any squabbles, ganged up and beat him to unconsciousness. Bouncing on his chest and stomach.”

“Amongst the culprits was the son of the serving principal of Kings College of Commerce (KCC) secondary school, Buguma City of Asari Toru local government of Rivers State.”

She added, “Seeing the condition of the innocent boy dying of excruciating pains, one of the teachers of the aforementioned school, carried the boy to the principal. The only statement the animal (principal) could utter to his son was, ‘You’ll always be mentioned in the form of atrocities’, without hearing from both parties.”

She noted that on seeing that the boy’s situation is getting too serious, the principal ordered that the boy be taken home.

He said, “this boy is dying here oh! come and carry him home before he dies in my office! If he wants to die he should go home and die at his house not in his office”.

“He didn’t reach out to the parents not even a single teacher from that school. Since Friday till today he gave up, we’ve been struggling with his health, struggling with his pain and all of it. Till….our boy gave up the ghost this morning. The principal and his son have taken to their heels. God of vengeance…I believe you are not dead,” said Wokoma.

The unhappy young lady in her expression of pain says again, “Our boy has gone just like that…chai this world is wicked ooo…my darling nephew…rest in the bosom of the Lord till we meet again. I love you and will continue to love you.”

Meanwhile, Naija News had reported earlier that a yet to be identified cult group in Calabar horribly hacked an upcoming artist and student of the University of Calabar, Bright Moses to coma.