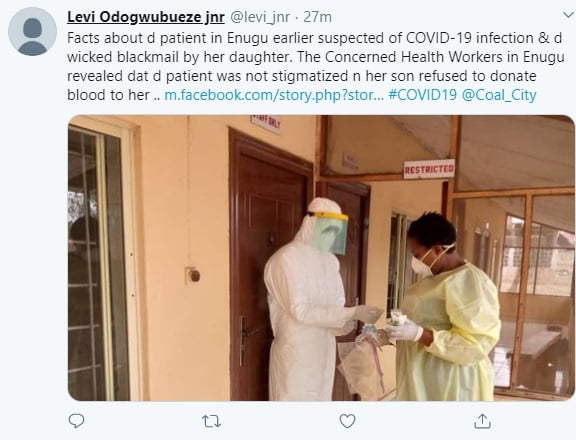 Naija News learned that the 70-year-old woman died a day after the result of tests conducted on her at the Irrua Specialist Hospital, Edo State proved negative.

Meanwhile, the daughter to the deceased aged woman died over alleged abandonment by the hospital without any medical treatment. The lady who made the allegation via her twitter handle also wrote a protest letter to Governor Ifeanyi Ugwuanyi of Enugu State.

Here is a tweet by Enugu Metropolitan network confirming the deceased’s daughter’s allegation.

1. The woman that tested negative for #COVID19 in Enugu has reportedly died and according to a message has been credited to her daughter is accusing the staff at the Isolation Center and the government of negligence.

This is the isolation Center. pic.twitter.com/uc3ryjzwaf

However, the  Enugu state health workers have responded to the allegation of the deceased’s daughter’ of the 70-year-old woman who tested negative to coronavirus in Enugu later died due to this negligence.

The statement signed by a number of health workers reads: “The 70-year old woman was promptly received and interviewed by doctors without any form of stigmatization from them or other health workers.”

The health workers denied that negligence was the cause of the woman’s death.

Revealing her cause of death, they wrote: “She had hypertension, sugar issues and kidney disease which were poorly managed before her admission at the isolation centre. Her personal doctor, a specialist at the ESUTH Parklane, was also contacted and later went to the Isolation Centre with two other specialists to see this woman.

They added that even the woman’s son refused to donate blood for her and they had to source for it outside.They referred to the daughter’s allegations as “mischievous”

The statement continues: “We therefore state categorically that this allegation is false, mischievous and a clear case of ingratitude.”

They added: “Where was the daughter all this while the mother was sick and being managed. It will be candid of us to know that where the woman was managed was clean and not the picture that is circulating as seen above. May her soul rest in peace.”

On this note, we commend the Enugu State Government for not joining issues with the so-called daughter of the woman who deliberately did not write her name, in her immoral, insensitive and baseless vituperations against the state and

we state that we have basic knowledge of what transpired as well as the high level commitment of the medical doctors and other personnel who worked tirelessly to manage the woman, that was first REJECTED by all federal medical institutions in Enugu, before she was accepted by the