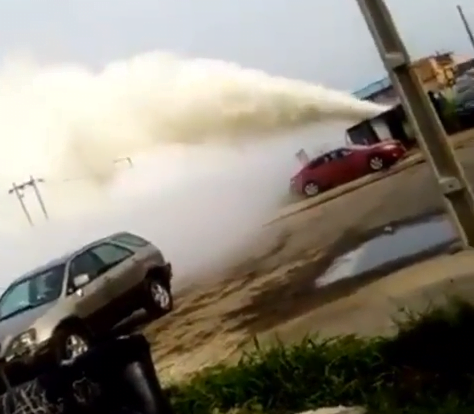 Naija News has obtained a video clip which is reportedly the footage of the moment gas cylinders burst out in Abule Ado which resulted in the deadly inferno that caused the destruction of properties and claimed 17 lives on Sunday.

The video was said to be recorded by residents a few hours before the explosion rocked the place.

One could hear the voice of a young lady in the video chanting that the gas was coming out of a trailer.

Recall that the Nigerian National Petroleum Corporation, NNPC on Sunday in a press release said that the explosion that rocked Abule Ado in Festac town area of Lagos State, Nigeria’s commercial city was as a result of a Gas explosion.

Meanwhile, another report from the Director-General Lagos State Emergency Management Agency (LASEMA), Dr Olufemi Oke-Osanyintolu, on the gas explosion that occurred at Abule-Ado area of the state opined that the cause of the inferno is yet to be known.