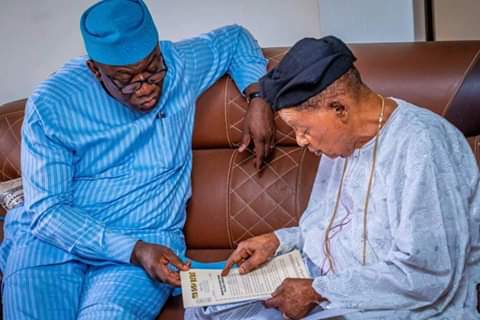 The Alaafin Of Oyo, Oba Lamidi Adeyemi on Sunday received the Governor of Ekiti State, Kayode Fayemi, at his resident in Ibadan, in respect to the letter forwarded to the governor on March 12.

The Alaafin in his statement noted that he wrote the letter to the Governor on behalf of other monarchs in Yorubaland, including the Ooni of Ife, Oba Adeyeye Ogunwusi; the Awujale of Ijebuland, Oba Sikiru Adetona; and the Alake of Egbaland, Oba Gbadebo Adedotun.

The monarch noted that the letter became necessary following the treatment of Ekiti traditional institution and its overall effects on the Yoruba culture.

The Chief Press Secretary to Gov. Fayemi, Yinka Oyebode, while speaking on governor’s visit noted that it was as a result of his respect for the culture and tradition of the Yoruba.

Oyebode said, “The governor paid a visit to Kabiyesi, the Alaafin of Oyo so that he could explain the situation of things regarding the traditional institution in Ekiti State to him in a meeting rather than writing a letter; it is a matter of courtesy.”

“They had a fruitful discussion on the matter. What happened is a follow-up to the letter written by the Alaafin. The governor said it was important for him to meet the Kabiyesi.”

“The visit was to shed light on some fundamental issues raised by the royal father in the letter; to accord him the deserved respect and to explain things.”

“As someone who has respect for our culture as well as our traditional institution, Governor Kayode Fayemi felt that it would be better to go to the Alaafin of Oyo and explain things to him as a father to son.”

Oyebode who noted that the visit was rewarding said, “You will recall that the Kabiyesi wrote the governor on the traditional institution in Ekiti State. The governor, being a man of culture and a respectable Yoruba man, went to explain things. It was an exchange of views between a father and a son.”