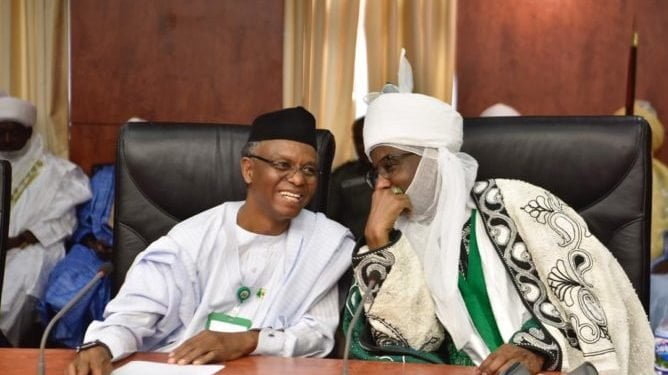 The Kaduna State Governor, Mallam Nasir El-Rufai has confirmed that he is visiting the dethroned Emir of Kano State, Sanusi Lamido Sanusi II in Nasarawa.

This he confirmed via a post on his official twitter account on Friday where he also shared a picture of himself in a car en route Nasarawa State.

“El-rufai is on his way to Awe to visit HH Muhammadu Sanusi II,” the Governor wrote.

Malam Nasir @elrufai is on his way to Awe to visit HH Muhammadu Sanusi II pic.twitter.com/xLzwJ3EmDY

This online platform recalls Sanusi Lamido was on Monday, dethroned as the Emir of Kano by the Kano State government under the leadership of Abdullahi Ganduje, the state governor.

Few hours after his dethronement, the ex-CBN governor was appointed as the Vice Chairman, Kaduna Investment Promotion Agency, (KADIPA) and later as the Chancellor, Kaduna State University (KASU) by the Kaduna State governor Nasir El- Rufai