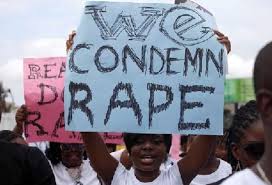 A 52-year old landlady has been drugged and raped by a 19-year old boy at Ilesan Remo area of Ogun state.

The crime was said to have taken place on Sunday, March 1st, after the suspect who lives with his parents, Mr. and Mrs. Adelena in a rented apartment, conceived the idea to sleep with the landlady in order to satisfy his sexual desire.

He was however caught red-handed and handed over to the police.

He confessed that he took a sleeping pill, which his mother keep inside their room and put it into the landlady’s food when she was about to eat in her room.

He said the landlady became unconscious after eating the food, due to the drug.

The suspect, Rafiu, then went back to check and noticed she was asleep already.

He then raped the 52-year old woman before he was caught by the landlady’s daughter, Lafiyat Ajeigbe, who just came back from school.

The mother of the suspect, Mrs. Bolanle Adelena, was invited by the Police and she defended herself that she uses the sleeping tablet whenever she finds it difficult to sleep.