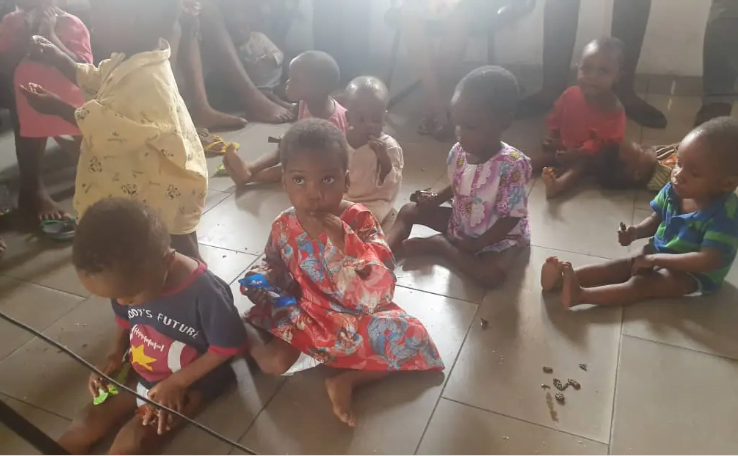 The spokesperson of the command, Nnamdi Omoni noted that the factory was stormed by men of the Eagle Crack Squad who acted on credible information.

He revealed that during the raid the squad found 4 female teenagers, while 24 babies, ages 1-2 years old were rescued on Tuesday.

According to him, “Today I am glad to inform you that Operatives of the Eagle Crack in a covert Operation yesterday 25/2/2020 at about 1530hrs burst a child Trafficking Syndicate at Woji in Port Harcourt, where twenty-four babies between the ages of 1 and 2 years and four pregnant teenagers were recovered.”

“The babies and the pregnant teenagers who are frail and malnourished are currently receiving medical attention at the Police Clinic, while investigation is still on with a view to making more recoveries and bringing the masterminds to justice.”

“The Command is hereby appealing to the public, particularly residents of the State whose babies are missing to come forward for identification and collection.”

“They are also enjoined to increase their security consciousness by reporting any suspicious movement around them to the nearest Police Station, via the following security numbers.”

“The Commissioner of Police, CP Mustapha Dandaura wishes to appeal to the public to continue to have faith in the Command, as he is poised to sustain the existing peace in the State and will continue to remain professional and focused in the discharge of his constitutional responsibilities, while strongly soliciting for your support and cooperation.”