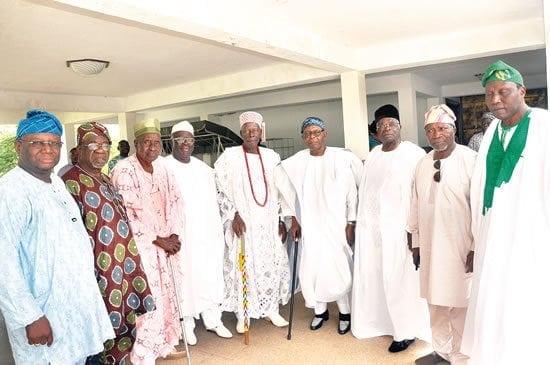 Some Yoruba Elites in a meeting held at Agip Hall, Muson Center, Onikan, Lagos on Wednesday, 19 February, has described Nigeria as been unfortunate with an Illiterate administration, lead by President Muhammadu Buhari.

Speaking at the meeting which witnessed the presence of some South-West leaders, University and Polytechnic heads with some represented, an icon of the Afenifere noted that he feared for Nigeria at this time having a leader who is illiterate and has no positive impact to make in the country.

Naija News understands that the statement above was made by 96-year-old statesman, Pa. Ayo Adebanjo, who is also a chieftain of the Afenifere.

Adebanjo further stated that "President Muhammadu Buhari is less concerned about the future of Nigeria, he is only bothered about his cows if not he would not say restructuring Nigeria to return the country to the era when Africans were trooping into our nation for greener pasture is a waste of time."

The group, however, charged President Buhari to refurbish the country's educational sector, economy, security and other infrastructures, adding that Nigeria will be faced with more difficult challenges in the future if those needs are left unattended.

On the other hand, Professor James Ayinde Fabunmim who is a keynote speaker in the meeting pointed out that without promoting a knowledge-based economy and society, poverty, hunger, starvation and economic degradation will crowd and ruin the country.

He said: "Compare two economies – in one the raw materials are exported with no added value, while needed manufactured goods are imported. Thus is buying high, selling low, which leads to loss of wealth.

"Whereas if human knowledge was used to add value to natural resources before being exported, we would be selling high and buying low, leading to gain of wealth. As a matter of fact, there are nation-states with little or no natural resources, yet they thrive because they managed to develop an economy that relies exclusively on value addition based application of human knowledge."