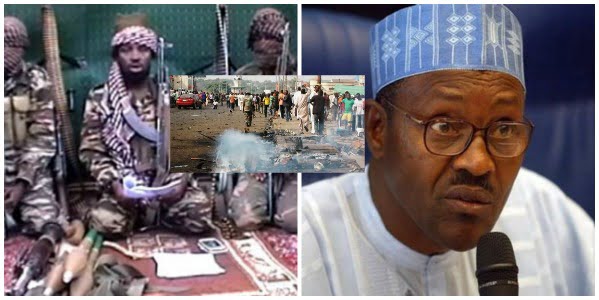 “You are in big trouble now“, the factional leader of the dreaded Boko Haram terrorist group, Abubakar Shekau, has told Nigerian President, Muhammadu Buhari in a fresh video released by the terrorist group.

Naija News reports that the Boko Haram leader gave this warning in a fresh video where he said his message is targeted at those who pretend to be Muslims but are not.

The Boko Haram leader mocked the President Buhari, who he claimed is 80 years old for being booed in Maiduguri, the Borno state capital, last week. The President was on a condolence visit to the government and people of the state over the killing of 30 stranded travellers by the insurgents when he was jeered.

On President Buhari, Shekau said: “President Buhari, you said you are almost 80 years old and you are busy going about, and now your people have started booing, right? You just wait for your angels of death,” the Boko Haram leader said.

He added: “President Buhari, simply because some persons told you that they have killed our commanders, so now you are emboldened and you want to kill Shekau, right? Who is Shekau, a small person to you? But you are now in trouble Mr Buhari; you are in big trouble. I am still here, that little boy that has defied the leaders of the world. I am still around, you just wait, it will soon be over before we all meet in the hereafter.”