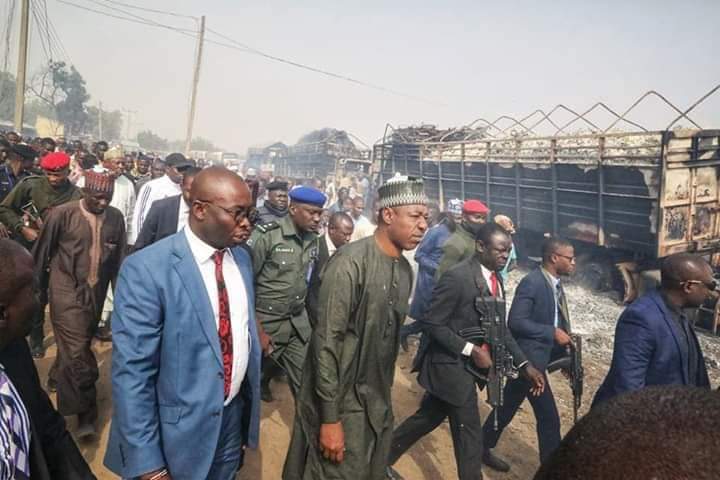 Governor Babagana Zulum of Borno State has berated soldiers for giving Boko Haram free access to attack and kill residents in the state.

Naija News recalls that a fresh attack by Boko Haram terrorists on Borno State had resulted in the death of at least 30 persons while no less than 18 vehicles were also completely burnt.

It was gathered that the insurgents launched the attack against travelling passengers in Auno, a town 20 kilometres from Maiduguri, Borno state capital.

The passengers were en route to Maiduguri before they were attacked by suspected Boko Haram terrorists around 10 pm on Sunday.

According to residents of the area, the passengers had stopped over at Auno as a result of the blockade of the road into the state capital by the military operatives after they missed the curfew.

Addressing Sunday Igbinomwanhia, garrison commander of Operation Lafiya Dole, at the scene of the incident on Monday, Governor Zulum accused soldiers of deserting the community around 5 pm on a daily basis.

“We have to be brutal in telling the truth. I am pushed to the wall to say the truth. Since I was inaugurated as governor of Borno state, Boko Haram has attacked Auno six times. Another thing is that the military has withdrawn from Auno town,” he said raising his voice.

“I am not undermining the capacity of the military but we have made repeated appeal for the military to establish their unit in Auno. They are here but as soon as it is 5 pm, they close the gate and lock the people and go back to Maiduguri. This is not right.”

Naija News understands that Zulum was cheered by the crowd that gathered at the scene during the governor’s visit.

Responding to the governor’s query, Sunday Igbinomwanhia insisted that the military will not deliberately allow Boko Haram to kill residents.

He explained that the troops were conducting clearance operation at other locations when Boko Haram attacked the community.

The garrison commander urged residents of the community to provide credible information to the troops in order to secure them.