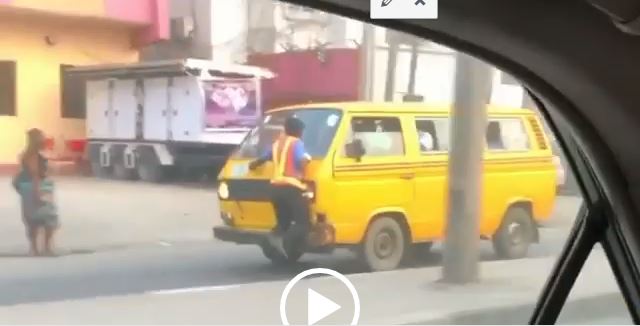 Just when we thought we have seen enough police drama, boom! another hilarious event has occurred in Yaba area in Lagos State.

In a now-viral video obtained by Naija News, a Nigerian Police Officer who was acting like a ‘Spiderman’ was spotted hanging on the bonnet of a Danfo bus in Lagos over bribe.

It was reported that the police officer whose name is yet to be identified demanded a bribe from the Danfo bus driver, but that the driver ignored him and went on riding.

This made the funny officer jump over the bonnet of the moving bus while the driver refused to stop.

However, this media platform understands that the funny incident is not peculiar as Lagos State has been known for dramatic events on the daily.

Watch the hilarious video below: