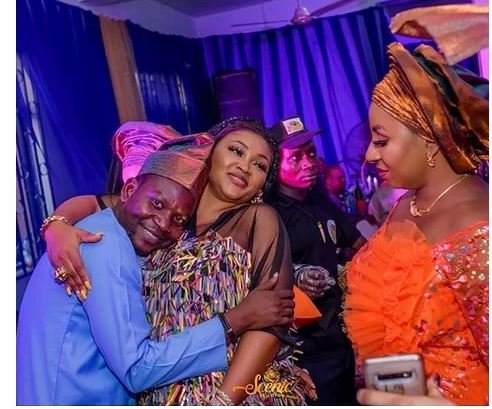 Nollywood celebrity couples, Afeez Owo and his wife Mide Martins were part of guests at the recent child dedication party of another actress, Wumi Toriola.

During the event, Afeez Owo took a funny picture of him resting his head comfortably on the chest of fellow actress, Mercy Aigbe.

Naija News, however, understands that Aigbe is a close friend of Martins and the picture with her husband was nothing more than a playful shoot and catching fun at the event.

Meanwhile, Afeez Owo has now shared the photo on social media last night, asking fans to give the perfect caption for it.

Amidst other responses, Adeniyi Johnson wrote “Kini gbogbo radarada yii ni waju mi? (What is the meaning of this rubbish you are displaying in my front)”

A fan identified as Bello also wrote: “Hmm oremi (my friend) in my presence u hug my husband like that”

Mide on her part gave a hilarious response when she wrote ”I can’t stop laughing!!! Thank you jare everyone!!! You guys fought for me already!!! I love you all”

This online medium reports that Mide is the daughter of late Funmi Martins, and has been married to her husband, Afeez Owo for over 15 years. They have two beautiful daughters.