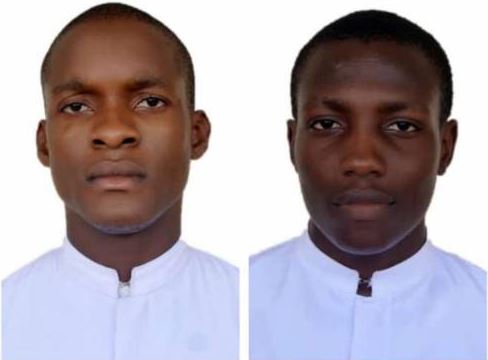 Naija News has been informed that one of the four young Catholic seminarians who were held captive in January by unknown gunmen has been killed by his abductors.

It could be recalled that the four youths were kidnapped on January 9, about four weeks ago by some unknown gunmen who stormed their school at Kaukau along the Abuja-Kaduna Expressway in the Chikun Local Government Area of the state.

On Friday last, three weeks after the incident, Rev. Father Usman disclosed that three among the kidnapped students have regained their freedom.

However, it has now been confirmed that Nnadi Michael, the withheld victim has been killed by the gunmen.

The names of the other three set free are Kanwai Pius, Stephen Amos John Paul and Umeanuka Peter. They are students of philosophy at the Seminary.

The Registrar of Good Shepherd Major Seminary, Rev. Father Joel Usman, confirmed the killing of the one Michael, barely 24 hours after the release of the other three.

Rev. Ft Usman announced that the missing student had been found dead.

“On a sad note, this is to inform all our friends and well-wishers that the remaining abducted seminarian has been found dead,” he said.

“Thank you very much for your prayerful support. Let us keep praying for Nigeria in great distress.”

Reacting to the incident, the Catholic Archbishop of Lagos, Most Rev. Alfred Adewale Martins, condemned the killing of Nnadi.

According to him, the failure of the Federal Government to safeguard the lives of innocent Nigerians is capable of breeding anarchy.

In a statement released on Sunday, the Director of Social Communications, Rev. Fr. Anthony Godonu, said the murder “was yet another indication of the failure of the present security arrangement of the Federal Government to address insecurity in the nation.”

He added that “The persistent cases of inability of the Federal Government to safeguard the lives of innocent Nigerians are capable of breeding a state of anarchy in the land as the people cannot just fold their hands and watch themselves slaughtered like animals.”