The  Leadership of the main opposition party in Nigeria, Peoples Democratic Party (PDP) has failed to back down on its constant outcry after the supreme court removed candidate, Emeka Ihedioha, as the governor of Imo State.

Naija News Understands that Leaders of the  Party called for the intervention of the United States, United Kingdom, and the European Union in the judgment of the Supreme Court.

The party leaders made the call on Friday as they continue their protest against the judgment of the apex court which sacked the PDP candidate, Emeka Ihedioha, as the governor of Imo State. The PDP national chairman also expressed support for Abaribe who had called for the resignation of President Muhammadu Buhari over insecurity in the country.

“On behalf of the PDP and the poor masses, there is a need for the international community to come to the assistance of our dear country,” “Nigeria is a member of the comity of nations. Nigeria is not an island. The content of our letter is for the international community to advise our government to obey the rule of law, particularly as it relates to the national assembly and the judiciary.” He Said

Those who took part in the protest include members of the PDP National Working Committee (NWC), Board of Trustees (BoT), and National Assembly, among others.

The National Organising Secretary, Colonel Austin Akobundu (rtd) had hinted in a statement on Thursday that movement during the demonstration would be by individual vehicles in a peaceful and non-violent manner.

Here are the Pictures of the protest 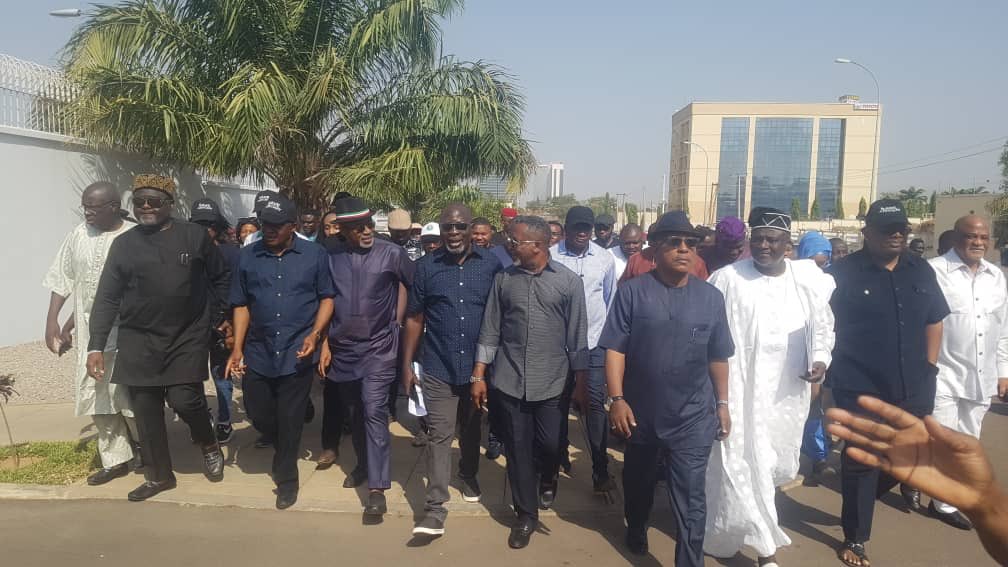