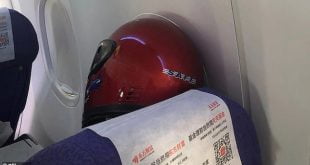 With the recent outbreak of the deadly Corona Virus, a worried passenger has been pictured wearing a motorbike helmet on a flight from China to Australia.

The man’s picture emerged on the flight from Shanghai to Perth yesterday morning.

See photo of the man below:

Those who landed in Perth about 9.30am on the nine-hour China Eastern flight also had to stay in their seats while officials sprayed around them, one passenger said.

‘When I transferred in Shanghai I did not see anyone in the airport without a mask,’ passenger Marina Jambrina told The West Australian.

‘There was one guy wearing a [motorcycle] helmet,’ another passenger John Fu said.

The virus has killed 131 people dead, and about 5,568 confirmed infection cases across the world.