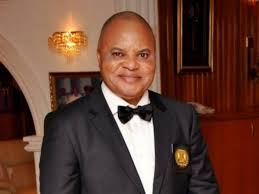 According to Iwuala, the senator who represented Imo North between 1999 and 2007 and was the APGA governorship candidate during the 2019 election in Imo State was found to have been guilty of alleged anti-party activities.

Araraume had publicly pledged to work with the governor of Imo state, Hope Uzodinma, who is a chieftain of the All Progressives Congress.

He further noted that Araraume endorsed the APC candidate of the Okigwe North House of representatives rerun election as against the APGA candidate.

To this effect, the party decided to expel the senator.

However while address journalists today, Araraume said that the caretaker committee chairman had no legal rights to speak for Imo APGA.

“We have said that what we are running in Imo State now is a coalition. APGA, APC, AA, and part of PDP led by Senator Samuel Anyanwu are supporting the APC government of senator Hope Uzodinma.”

He insisted that he was still in APGA and the caretaker committee chairman had no power to expel him or any member of the party.