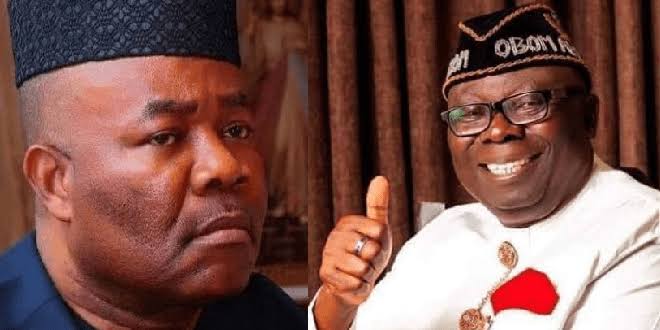 As the Akwa Ibom Senatorial rerun elections draw near, the two major contending parties in the election have been accusing each other of the attempt to rig the election which was scheduled to hold coming Saturday.

Naija News understands that the Peoples Democratic Party and the All Progressives Congress has been challenging the peace of each other with claims that there is the other party is planning to rig the election with the help of security men.

Both parties on Thursday have alleged that there are plots to rig the Essien Udim Senatorial election scheduled for Saturday, with claims that they had intelligence on how the police had been compromised to unleash mayhem in favour of the APC and the PDP respectively.

In a statement on Thursday, the PDP National Publicity Secretary, Mr Kola Ologbondiyan, alleged that a DIG had reportedly promised a serving minister that with proper funding, he would do “the same thing that was done in Bayelsa State during the November 17, 2019 governorship election” in favour of the APC.

“As part of the strategy, the DIG promised to deploy a more senior Commissioner of police than the one in Akwa Ibom State to take charge of the command,” said Ologbondiyan.

He added that part of the plot was to seek the transfer of the state Resident Electoral Commissioner, Mr Mike Iginni, and replace him with an already compromised official.

“We are concerned about the plot to deploy a huge number of policemen into a local government and put them under the control of such an officer as a DIG.”

“It is extremely suspect, as past experiences across the nation had shown that such deployments led to violent confrontations, killings, maiming and massive intimidations of voters that only aided election riggers and other anti-democratic forces to compromise electoral processes.”

On the other side, the Deputy National Publicity Secretary of the APC, Yekini Nabena, said Igini is planning to frustrate the party.

Nabena in his statement faulted Igini for fixing the election into the state constituency in Essein Udim Local Government Area on Saturday without a valid order of the court.

“It is on record that Senator Godswill Akpabio challenged INEC and the Court of Appeal upheld his appeal, nullified the PDP’s fraudulent victory and ordered retrieval of the certificate of return given to the PDP senator by INEC,” He said.

“However, the Court of Appeal ordered repeat election in only Essein Udim Local Government Area of the state, Senator Akpabio’s LGA.

“Senator Akpabio now a Minister of Niger Delta Affairs has opted out of the repeat election citing his current higher responsibilities to the nation and the continuous occupation of INEC office by a compromised REC.”