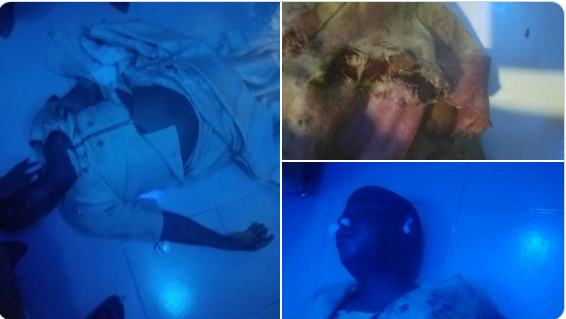 Some suspected robbers have murdered the owner of a popular restaurant, WhiteHouse, Aliu Sheu at Sabo Yaba, Lagos State. According to a report, the deceased was robbed on Monday in his house which is located in Somolu, while is properties were stolen, including his Automated Teller Machine card.

A further report had it that the robbers transferred and withdrew N360,000 from the victim’s bank account. Aliu reported the robbery at the Pedro Police Division on Tuesday and thereafter returned to his restaurant and at night went home to rest. Upon his arrival at home, the assailants were already in his apartment and shot him in the chest without taking anything. The 48-year-old was rushed to the hospital, where he was confirmed dead.

A family of the deceased, Shina Sheu, who reacted to the incident on his Twitter account on Thursday said his brother was killed in cold blood. Sheu called on the police and the Lagos State Government to investigate the murder and bring the culprits to justice.

He tweeted, “He (Aliu) was robbed in his home at exactly 2.46 am. They robbed only his apartment (2nd floor) out of the whole building; they collected all the gadgets (7) and his ATM card. They withdrew N360,000 from the ATM and transfer.” “Following morning, he went to the police station to report the incident at the Pedro Police Station and the incident was kept low key, so far robbery has become something of a regular occurrence in our country. He returned to his regular business at his regular resumption hour as usual.”

“The following night, 21/1/2020 at exact same time as the previous one, 2.44 am, the previous gang was just two and had no guns, but these particular killers were eight, fully armed with guns. They forced their way in and shot him twice (in the chest and right arm) and left. We rushed him to the nearest hospital, but he gave up before we got there.”

He further stated that the attack was a product of “underground or background” work and pleaded with the authorities to investigate the incident so the family members would not become a victim of such attacks. He further tweeted, “We also need to know if we (are) safe in our very own country; to also know if other family members are safe. We are still in shock to see a devoted Muslim brother who did not belong to any cult or group to be killed like this.” “Whoever did this shall never no peace till they get caught. Whosoever ended his life prematurely shall be useless till the end of their life.”

Another family member of the deceased, Bolakale, said the Nigerian system has failed the deceased, who laboured for 22 years to build his company. “This case must not be swept under the carpet. We demand justice; we want to know who and why Aliu was brutally murdered. It was not God that killed him, but a failed system”. Shina has revealed that the deceased had been buried at their hometown, Ilorin, Kwara State.

The incident was confirmed by the spokesperson of police, DSP Bala Elkana, he added that investigation is ongoing. He stated, “On Tuesday, we got information that eight armed men broke into the man’s house on Oladehinde Street, Apata, Somolu, presumably with the intention of robbing him.” “However, they panicked when his neighbours raised the alarm. As they were hurrying out to escape, they shot the 48-year-old.” “He was rushed to the General Hospital, Somolu, where a doctor certified him dead and his body was taken to a mortuary.”

He added that a suspect, Abiodun Ariyo, had been arrested and transferred to the State Criminal Investigation and Intelligence Department, Panti, Yaba.