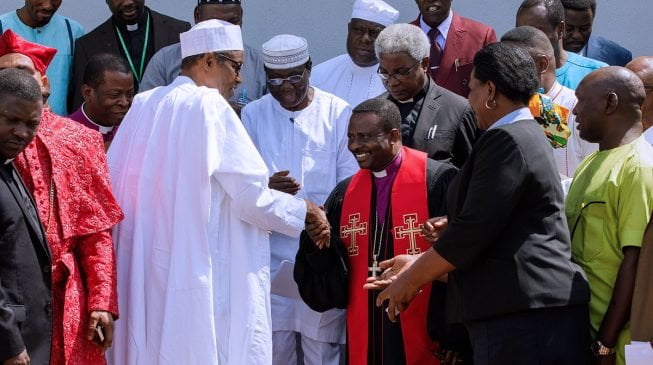 Prophet Isaac Itodo, the General Overseer of the Ark of Covenant Total Life Ministries, says God is very angry with the leadership of the Christian Association of Nigeria (CAN).

Naija News reports that Prophet Itodo said God is angry with CAN leadership because it has been enmeshed in playing politics and fraternizing with political opponents of the present administration in heating the polity in Nigeria at the detriment of uniting the body of Christ in Nigeria.

This online news platform understands that Prophet Itodo stated this in an exclusive chat with journalists in the wake of the killing of the Chairman of the Christian Association of Nigeria in Michika Local Government Area of Adamawa state, Rev. Lawan Andimi by Boko Haram terrorist group.

The fiery cleric stressed that the prophecy from God is that the leadership of the Christian Association of Nigeria (CAN) has compromised its position as a body of Christ to lead the children of God by availing itself as a willing political tool for sale to the highest bidder.

His words: “The Prophecy from God is that from the time of Ayo Oristejafor as the Chairman of CAN, the leadership of the association was compromised when they started dinning and winning with politicians and also using CAN as a political tool for settling political scores.”

“As strange as this may sound, the revelation from God is that the leadership of CAN as it was engaged in too many activities that brought the body of Christ into disrepute in return for a plate of porridge.”

When asked what he meant by activities that brought the body of Christ into disrepute, Prophet Itodo stated that some of the decisions taken by the administration of former President Goodluck Jonathan were not in the interest of the country and instead of the leadership of CAN to speak out, they supported him by playing the religious card.

“The CAN was a willing tool used by the Goodluck Jonathan administration to hide the killings and mismanagement of public funds meant for the procurement of arms and ammunition to prosecute the Boko Haram war in North-East Nigeria.”

The clergyman further added that some leaders of CAN instead of sober reflecting on the killing of the Chairman of CAN in Michika Local Government Area of Adamawa State, they have capitalized on it to make monetary demands from highly placed politicians in the country for propaganda purposes.

“God works in mysterious ways. Ways we mortals cannot comprehend. For in Romans 1:18, it stated that “For the wrath of God is revealed from heaven against all ungodliness and unrighteousness of men, who by their unrighteousness suppress the truth.

“It is ironic that these leaders have forgotten so soon on about the wrath of God in Ezekiel 25:17 that states how God will “execute great vengeance on them with wrathful rebukes. Then they will know that I am the Lord when I lay my vengeance upon them.”

The prophet averred that God is angry with the leadership of CAN and advises them to retrace their steps or be ready for God’s visitation upon them.

“It is indeed a shame that the body of Christ could denigrate to a level where truth would be far from them, where they take pride in bearing false witness against brethren. God is angry with them on how they have compromised by preferring to tell lies instead of telling the truth at all times like Jesus Christ.”

Prophet Itodo further stressed that CAN allowed itself to become an accomplice in the unemployment equation by seeking to pray for Governors and top politicians that are ready to pay than holding a nationwide spiritual exercise to disgrace the devil and his plans for Nigeria.

“The leadership of CAN is cash and carry, where prayers are offered in return for money. They prefer to be seen in the company of governors and other political office holders who can pay their price in return for prayers. And to think that the leadership of CAN is now using the killing of Rev. Lawan Andimi to seek personal gains from top politicians in the country is very sad.

“The leadership of CAN cannot mock God because instead of bringing the Church together, they have elected to share money and utter just anything to the highest bidder because they have turned CAN to the biggest political party in Nigeria by using the name of God in vain to promote their empire for selfish interests and gains, forgetting that the scriptures state that Thou shalt not take the name of the LORD thy God in vain; for the LORD will not hold him guiltless that taketh his name in vain.”

The clergyman stated that several other revelations were received from God on how the leadership of CAN had compromised. If they do not desist from their old ways, the wrath of God will come down heavily on them.

“God revealed that the leadership of CAN must imbibe the spirit of uprightness and deviate from their old ways. That they should seek His Face in times of tribulations rather than running to those whose actions and inactions have contributed to the level of insecurity in Nigeria.”

When asked about the state of insecurity in the country as one of God’s wrath on Nigeria, Prophet Itodo said the issue of insecurity had been politicized and blown out of proportion by politicians.

“The issue of insecurity has been politicized, and it is sad that CAN have been brought into the fray by these same set of politicians that are fueling the crisis to demand the sacking of Service Chiefs. Monies have indeed exchanged hands with the leadership of CAN for them to be calling for the sack of Service Chiefs.”