The leader of the Indigenous People of Biafra (IPOB), Nnamdi Kanu, has again alleged that President Muhammadu Buhari is dead and that the person in Aso Rock, Nigeria’s presidential villa, is an impostor whose name is Jubril Al-Sudani from Sudan.

Naija News reports that since Kanu resurfaced in Israel in October 2018, he has been alleging that President Buhari is an impostor, a claim which the President quashed after the IPOB leader presented what he described as “scientific proof.”

Reechoing his earlier stance that Buhari is dead and replaced by “Jubril of Sudan“, Kanu cited the absence of President Buhari at the official Buckingham Palace photo call for African heads of state at the banquet in London as part of the British-Africa Summit as a proof that the President is an impostor.

This online news platform understands that the IPOB leader made this claim in a post on social media network, Facebook on Wednesday, January 22. 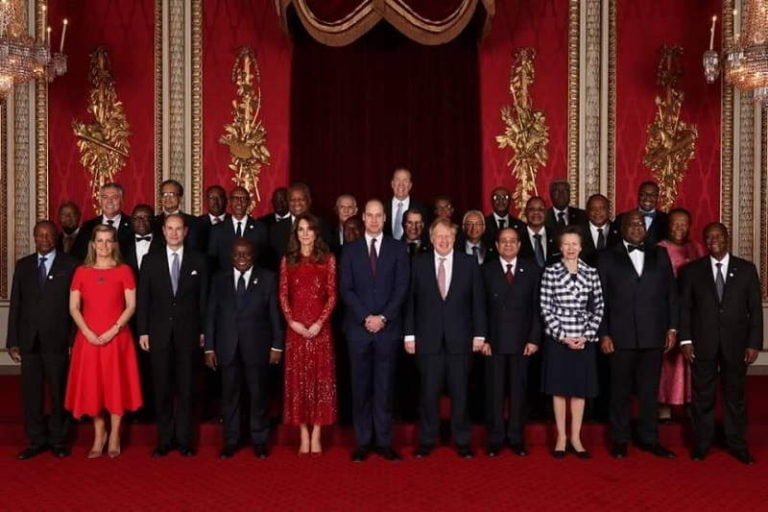 “Among the scientific evidence I presented, was the fact that Jubril is not as bald as Buhari, which led me to challenge him to remove his cap in public. Thanks to the ancient British royal dress code for state banquets, the world can now see that Jubril is not Buhari after all.

“In England, you must remove your cap if you want to enter a royal banquet unless you are a crowned head i.e. a king or queen. Below [see photo above] is the official Buckingham Palace photo call for African heads of state at the banquet in London as part of the British-Africa Summit. Buhari is nowhere to be found even though we are told he is in the UK. But we know Jubril attended the event and probably hiding in a toilet somewhere. He doesn’t want to remove his cap.

“I am sure Femi Adesina will come up with his usual and now legendary photoshopped pictures in the next few hours to deceive the already gullible Nigerian public. Thankfully this original picture taken of the attendees to the banquet is there as an eternal reminder of the shame of Nigeria,” the IPOB leader wrote.

Meanwhile, Naija News understands that President Buhari was absent at the photocall because Geoffrey Jideofor Onyeama, Nigeria’s Minister for Foreign Affairs, represented him. This was made known by Bashir Ahmad, the Personal Assistant to the President on New Media.