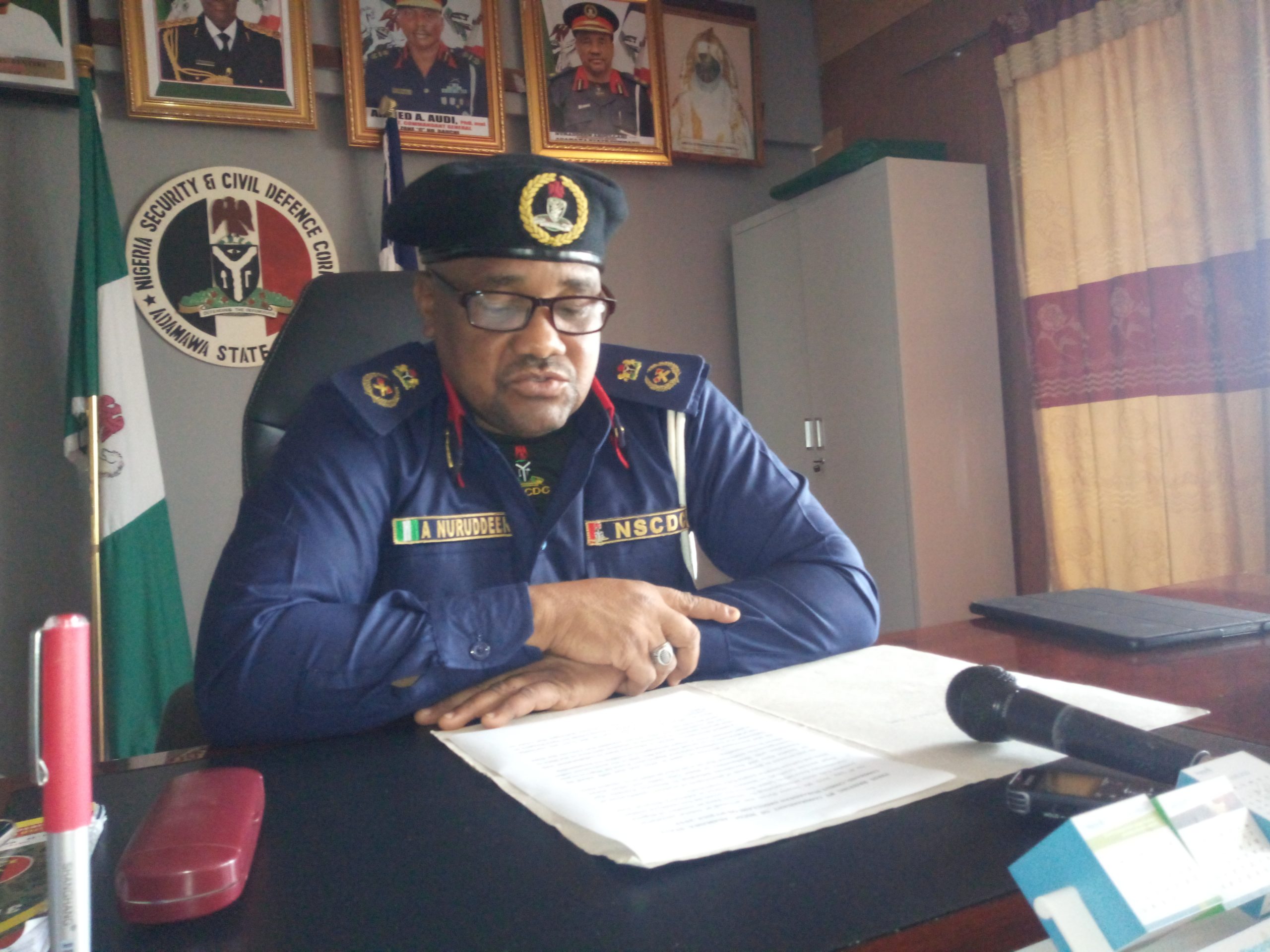 Residents are now sleeping with two eyes opened as many deserts their houses in Adamawa following incessant kidnappings being experienced in most parts of Adamawa state, just as the state Command of the Nigeria Security and Civil Defence Corps (NSCDC) arrested four alleged notorious kidnappers that terrorise Mubi and its environs.

Parading the suspects, Nuruddeen Abdullahi, NSCDC Commander in the state, said the command made the arrest last Friday in collaboration with the Nigerian Army and local Hunters Union of Mubi, as according to him the successful arrest followed a tip-off by patriotic citizens from the area.

“Today we are parading four suspected notorious kidnappers that for a long time have been terrorising people in Mubi and its environs.

“All the four suspects confessed to have been involved in several kidnapping activities around Maiha and Mubi South local government areas respectively.

“The suspects are now with the Intelligence and Investigation Department for further interrogation, after which their case would be forwarded to the office of the Director of Public Prosecution for appropriate action,” Abdullahi said.

The upsurge in kidnappings in recent times had now forced many residents to desert their houses in the night for fear of uncertainty.

Lamenting on this ugly scenario on his social media wall, a former speaker in the state House of Assembly, Barr. Sadiq Ibrahim Dasin regrets that‘’ in a spectacular manner similar to what one may call foreign enemy occupation, Fufore local government area has been taken over by kidnappers.

‘’In fact it has reached a situation today that people have not only become used to it, but they have resigned to fate. We are hopeless as a result of helplessness. Not only that the government has failed but our people have become a total failure themselves because everyone is now a kidnapper or an accessory to it. It is now a big ‘local business.’’

Dasin who was the immediate member House of representative representing Fufore, Song Federal constituency at the National Assembly further that, ‘’It is longer news and as a result, people no longer care who is kidnapped, where he or she is kidnapped, how much ransom was paid and by who nor to whom is it paid. It is everyday occurrence. And nobody seems to care.

‘’They devised different methods. Since most men do not sleep at night in our villages, once the kidnappers come and the man runs away into the bush, his wife or wives would be taken away. You have to pay.

‘’The current method trending now is kidnap of family members of absentee “well to do” members of our community. Today, most people that have N50,000  or so capital for doing business have moved to towns for fear of being kidnapped. The trend now is to kidnap the relatives they left behind. If the victim says he or she is poor, the kidnappers would say “min andi ai“ and then say “na waine ma mo woni Jimeta don na”? You then have to pay. Proxy kidnap one would say.’’

The former lawmaker warned that as much as residents continued to flee, the more the danger it posed to the prevailing insecurity and called for concerted efforts to fight the monster by joining hands with relevant security operatives in fishing out bad eggs in the society.

Also commenting a public affairs commentator, Mohammed Ismail, said the spiralling rate of kidnap for ransom has become a major security threat to the lives and properties of innocent citizens who have been at the receiving end of the scourge.

“Many families who are already facing rough times occasioned by the economic downturn in the country have been further thrown into economic woes having been forced to pay millions of naira as ransom in order to secure lives of relatives of their loved ones who were taken to the kidnappers’ den.

“The spate and manner at which kidnapping is taking place almost on a daily basis have begun to cause uneasy calm between the people, the security agencies and even the judiciary who are constitutionally mandated to punish defaulters,” he lamented.

We are on top of the situation – Police

The state police command, however, disagreed with the insulation that the situation is beyond its power. The command said in 2019 alone, over 300 suspected kidnappers were arrested, paraded and charged to courts for prosecution, but what happens in the courts is not within their purview.

The Command spokesman Suleiman Nguroje, (DSP) said, ‘’The command would not relent in keeping Adamawa state free of kidnapping and other crimes.’’

Nguroje stated that because of the deployment and employed tactics by the command, kidnappers have abandoned the state capital and relocated to the interior.

“Security strategies are being put in place. We would not tell you our strategies, but within the shortest possible time, kidnapping will be a thing of the past in Adamawa state,” he assured.

“ There is a collaboration with the sister security agencies fully supported by the state government and the moment that force becomes operational, we would see where the kidnappers would hide.

Nguroje further said that a new security outpost code-named ‘Operation Farauta is now in place intended to flush out all the criminal hideouts and black spots, either on top of the mountains, in the forest or elsewhere in the state.

Commenting on the recent protests over alleged release of kidnap suspects, especially that of Girei, he said, “ All the suspects were charged before Magistrate Court 4 in Yola and are currently in prison awaiting trial.

“But simply because the people were denied applying jungle justice on the suspects, they decided to go to the street to protest”, he explained.

Naija News recalls that in the last few months, dozens have been kidnapped by the armed assailants including a serving Divisional Police Officer (DPO) making the families of the victims cough out several millions of naira in order to secure freedom for their loved ones.

Some families were compelled to sell prized items including landed properties and household utensils in order to offset the ransom demanded by the kidnappers.