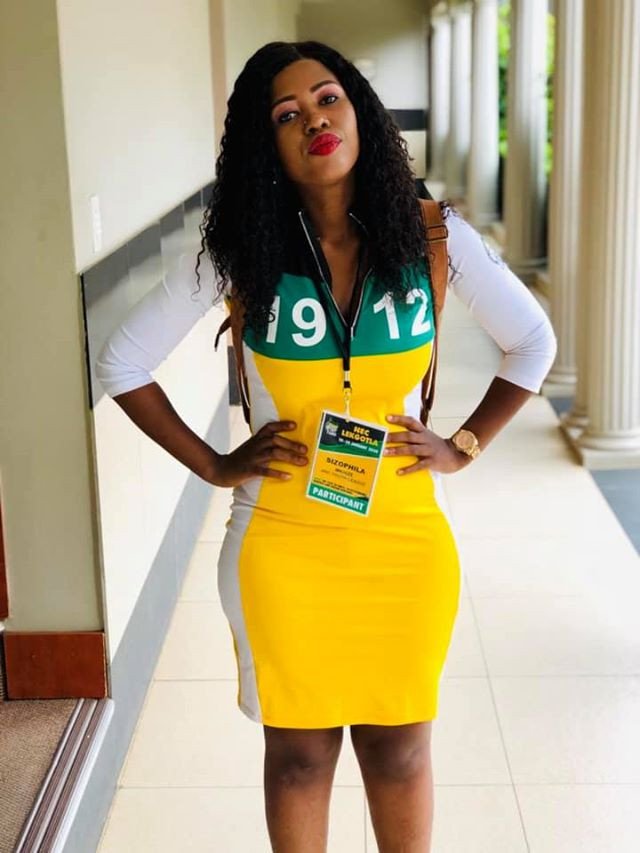 Sizophila Mkhize, the spokesperson of the ANC Youth League has shared her recent experience after she was allegedly prevented from entering the venue for her party’s programme.

According to her, she was barred from entering the venue of the ANC national executive committee lekgotla meeting because her dress was “too short”.

She shared the experience on her Facebook page, where she said that she was blocked by an ANC staffer at the door who told her to cover up because the dress was “too short”.

Mkhize also shared a picture of herself in her yellow and green dress she wore to the meeting.

The Sunday meeting in Irene, Pretoria, was called to draft the party’s plans for governance for the year ahead. But Mkhize, who posted a picture of her in her yellow and green dress, said she was told she could not enter the meeting because the dress was “too short”.

She added that the person who accosted her said she should look for extra clothes to cover herself because old people in attendance will complain about such a dress.

Mkhize, however, stated categorically that she was not going to allow herself to be bullied or sexualized, noting that her name and womanhood should be respected.

“This is me, attending the ANC NEC Lekgotla, I’m told I can not attend the Lekgotla because the dress I’m wearing is too short. A staffer from the SG’s office stops me by the door and tells me to go look for ihiya ngibhince because OLD PEOPLE ARE COMPLAINING ABOUT SUCH A DRESS CODE! I’m told my dress is too short, a young woman from the Presidency was called to come and explain this nonsense to me and her explanation is “INKINGA UMEKAHLE AND THIS DRESS IKUKHIPHA IZINQA, MANJE THEY WILL COMPLAIN AND THEY’LL SHOUT AT ME FOR ALLOWING YOU IN WITH THIS DRESS”

“I am not going to be bullied by anyone regardless of the office they come from. I refuse to be sexualised inside the ANC or whoever in the world! I’m a woman and you’ll give respect to my womanhood and my name,” she said.

She was eventually allowed into the venue.

See her picture in the dress.