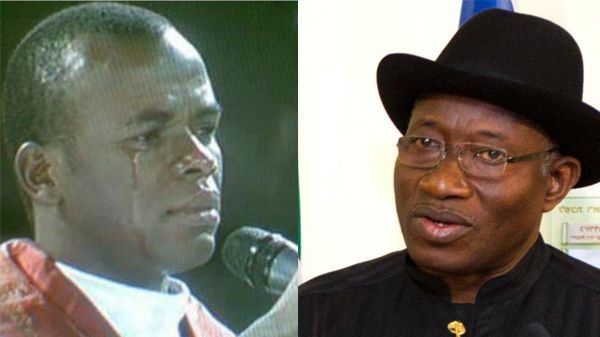 The Spiritual Director of Adoration Ministry in Enugu, southeast Nigeria, Rev. Father Ejike Mbaka, has alleged that former Nigerian President, Goodluck Jonathan, tried to bribe him after he prophesied that the latter will lose the 2015 presidential election.

Naija News reports that Father Mbaka made this statement while speaking during his homily on Sunday, in reaction to the allegation that he was paid by the ruling All Progressives Congress (APC) to prophesy the removal of Emeka Ihedioha as Imo Governor.

This online news platform had reported earlier that the Supreme court sacked Ihedioha as governor of Imo state and affirmed Hope Uzodinma as the winner of the March 9 governorship election.

However, since the prophecy came to pass, Nigerians have since expressed missed reactions, with some attacking the clergyman with the claim that he was bribed by the APC government led by President Muhammadu Buhari to give the prophecy in favour of its candidate, Uzodinma.

Reacting to the allegation, Father Mbaka, while speaking during his homily on Sunday, insisted that he was not being paid for his prophecies.

His words: “Some of you who are saying that I’m an APC man and I collect money for prophecy should stop talking.

“If it is a question of money, Goodluck Jonathan wouldn’t have lost 2015 presidential election because they were ready to give me everything provided they retained the seat.

“The message is not partisan, I’m not a politician, I am a prophet of God. The Governor of Enugu State and Ebonyi State we are praising for doing wonders, are they APC?

“I went to Imo State to pray for Uzodimma, yes! Is that your business? Did I go with your legs? If after everything Hope (Uzodinma) called me to come and pray in Imo government house who am I to say no?

“Even Catholics who should be at the vanguard of protecting me are coming hard on me. A gift God gave you people in which you should use as a pride, that it is in my church that this type of a thing is happening and you people are toying with it.

“Those who are advocating for banning prophecy are ungodly. Catholic church is a prophetic Church. Stopping prophecy, is closing the mouth of the holy spirit.

“Church will ordain you a priest, baptize you and confirmed you in the name of the father, son and holy spirit when you start doing the work of holy spirit the same church will attack you. This is uncalled for,” Mbaka said.