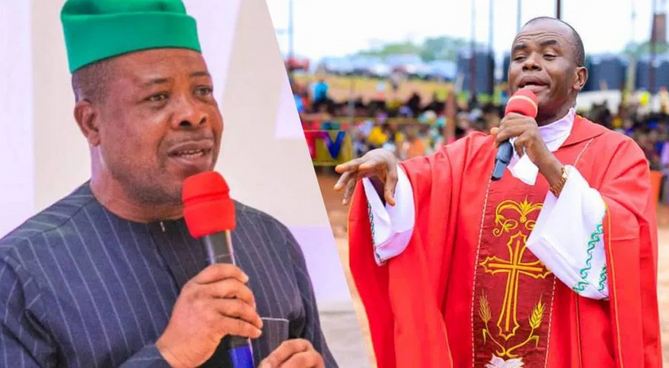 The Spiritual Director of Adoration Ministry in Enugu, southeast Nigeria, Rev. Father Ejike Mbaka, says Emeka Ihedoha, the sacked Governor of Imo State, southeast Nigeria, should have visited his ministry to avert the “sack prophecy” he gave concerning him.

Naija News had reported earlier that the Supreme court sacked Ihedioha as governor of Imo state and affirmed Hope Uzodinma as the winner of the March 9 governorship election.

Reacting to the development while speaking during the Homily at the Sunday morning service which held in his church, Mbaka said the then governor should have visited him to avert the prophecy.

His words:  “What’s the distance from Imo state to Enugu, that after given the message on 31st night, Ihedioha cannot come to adoration and seek for God’s intervention, rather he embarked on attacking and castigating the message and the messenger; tell me the person that attacked a genuine man of God and went scot-free?

“What I am doing here is extraordinary and unadulterated, it is not by power neither by might, the way Peter Obi attacked the message I gave him which later put him in this present political quagmire was the way Ihedioha also attacked me”

“I think that when a message like that is given the right thing to do is to ask the prophet what to do to avert it,”  Mbaka admonished.

READ ALSO  How To Apply For Nigerian Government 774,000 SPW Job