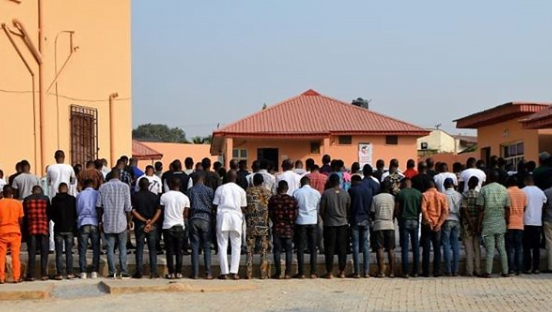 Reports reaching Naija News at this time confirms that the Economic and Financial Crimes Commission (EFCC), has made an arrest of huge numbers of some yahoo-yahoo-boys in the capital city of Oyo State.

According to the report, the anti-graft agency belonging to the Ibadan zonal office of the command have arrested 89 suspected internet fraudsters at the popular Club 360 located on the Akala Expressway, Oluyole Extension, Ibadan.

This was confirmed in a statement released by EFCC, stating that they have made the arrest following intelligence that the club is notorious for harbouring yahoo-yahoo boys.

The report reads; “In preparation for the late-night operation, officers of the commission had carried out series of discreet surveillance on the nature of activities going on in the nightclub which, according to intelligence, was notorious for harbouring suspected internet fraudsters.”

“The raid also led to the confiscation of scores of vehicles, laptops, sophisticated phones and other items.”

The suspects are said to be undergoing further interrogation by the command.

In another news, Naija News had reported that former Senator and rights activist, Shehu Sani, has dragged the Economic and Financial Crimes Commission (EFCC) to court over his continued detention.

The suit filed by Shehu Sani’s counsel, Abdul Ibrahim (SAN), before Justice A. B. Mohammed of the Federal High Court, Gudu, Abuja, indicates that the hearing would commence on Monday 20th January 2020.

Shehu Sani is suing the EFCC and the owner of ASD Motors, Alhaji Sani Dauda for the sum N100 million as damages for his illegal detention.