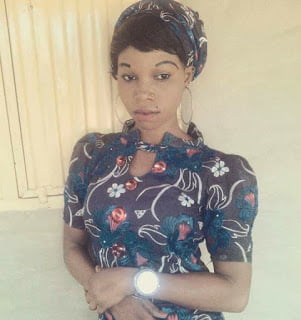 Residents of Bachure in Jimeta-Yola, Adamawa state capital were again thrown into mourning and despair a 23-year-old, Patience Amos Ya’u was reported to have been hacked to death by her boyfriend during a scuffle that ensued while they were alone in a room.

She was said to have been hacked by her boyfriend, Ali Mohammed Wakil whom they were always seeing together and parading himself as military personnel.

The gruesome murder of the girl threw the family, relations, friends, and staff of the Adamawa Press Limited, Publishers of The Scope newspaper, Yola where the father of the deceased works as Chief driver into agony.

Sources say that Patience who was newly recruited Army Officer could not be part of the training because of the tragedy which struck.

Some sources alleged that the boyfriend who claimed to be military personnel serving with 68 Reference Hospital Yaba in Lagos state may be a dismissed officer and only impersonating the military.

Another source at Damilu, where the incident occurred said that they heard the deceased and her boyfriend in the room, but could not categorically explain the circumstances that led to the killing of Patience.

‘’ Residents became more suspicious when we could not see the lady for good three days, and what worried us more was the terrible odor emitting from their room,’’ said a resident who doesn’t want to be mentioned.

According to this resident, ‘’what  compounded the situation was how the door of the room was locked from the outside, a development which compelled people  to forcefully open the window of the room only to discover the body of the female lover at the stage of decomposition.’’

The discovery of the dead body attracted a crowd who later proceeded to the palace of the ward head before the matter was finally reported to the police.

A family source who confided to newsmen said that they saw the suspect near the residence of the father of the deceased, strolling and enjoying his normal life at the time when the girl was declared missing.

Narrating how the incident happened, the father of the deceased, Amos Ya’u, explained that his daughter left his house on the fateful  Saturday to plait her hair but could not come back again despite her assurance to them that she was on her way back home.

He said that they had called her on phone on that fateful evening, but she told them that she will be coming back home and waited but could not see her.

According to him, they called her line later on Sunday but it was not going through, and that since that day, they had not seen her until four days later when a police officer came and informed him of her death, a situation he could not believe it.

But when contacted, the Spokesman of the State Police Command, DSP, Suleiman Nguroje, confirmed the killing of Patience.

Nguroje said that when the matter was reported to the command, the Commissioner of Police directed that the suspect is apprehended and that their men were able to arrest the suspect.

He stated that the suspect is now cooling his heels at the Criminal Investigation Department and that he has been assisting them with relevant information that led to the murder of the girl, adding that the police are doing everything possible to gather both human and material evidence.

He further that the suspect who identified himself as Ali Mohammed Wakil, a military officer serving at Reference Hospital Yaba in Lagos state Nigeria.

Naija News recalls that only last week  Maxwell Nashan, a young reporter with Federal Radio Corporation of Nigeria (FRCN) F.M station,  Fombina FM in Yola, was hacked to death in the bush on the outskirt of Vunokilan, in  Girei local government area of the state.