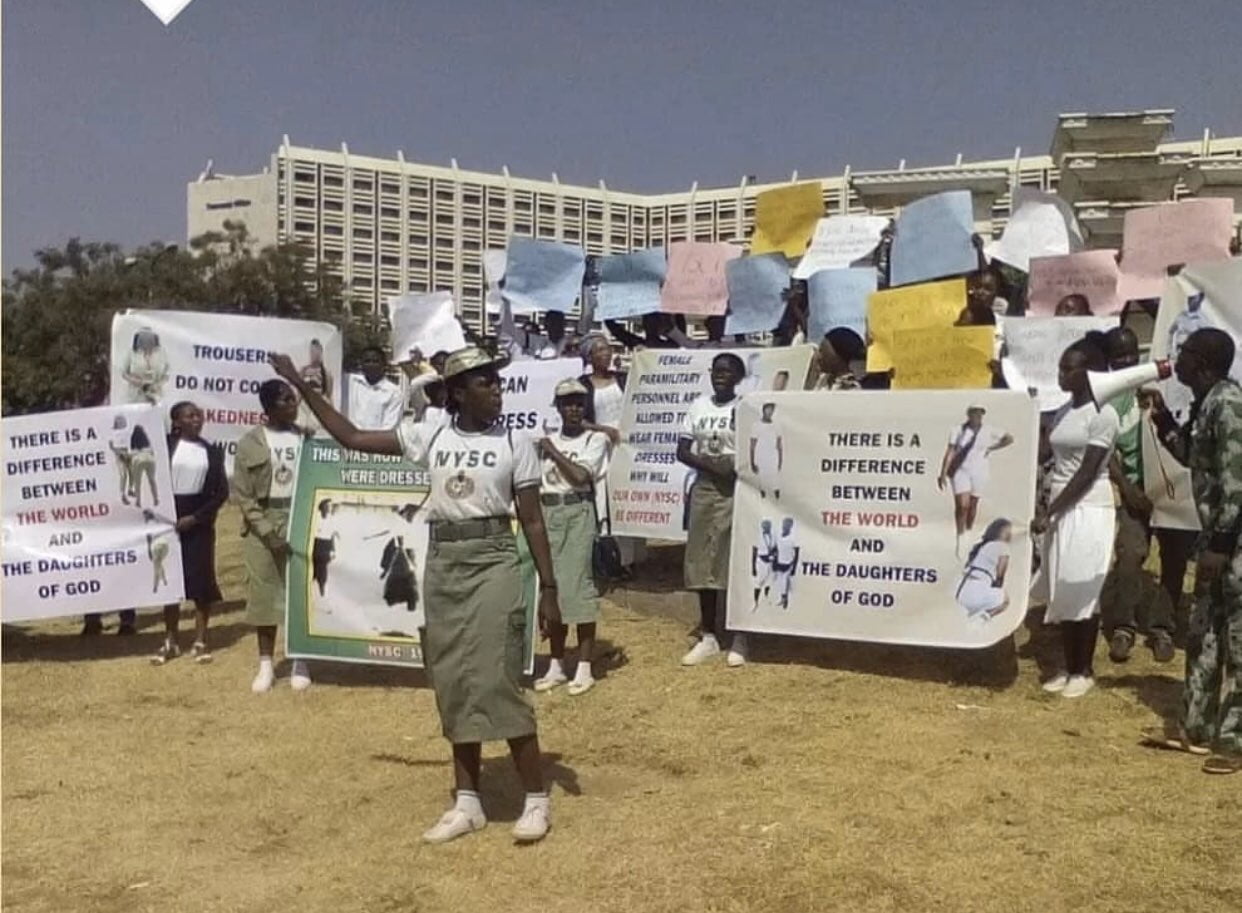 The decision by an advocacy group to hold a protest to press home their demand for the National Youth Service Corp (NYSC) to allow ladies were skirts instead of trousers has attracted reactions on social media.

The group in their claim, are of the opinion that ladies who want to wear skirts instead of trousers as is currently the case, should be allowed to do so.

The group say been forced to wear trousers is against their religious belief. They quoted Deuteronomy 22:5 which says “A woman must not wear men’s clothing, nor a man wear women’s clothing, for the Lord your God detests anyone who does this,” as the basis for their protest.

The protest has however attracted mixed reactions. See some reactions below:

Mtcheewww… When I saw NYSC trending I thought they had finally decided to start paying us the N30,000 allowance and not all this so called movement.. Please, let’s be guided in this country and not involve religion in every matter.

This is what happens when Religion takes the place of common sense. NYSC camp can be physically demanding. How do expect to perform activities smartly in this labulabu skirt? Poverty is worrying them too sha. https://t.co/1EIAIu1P2q

Fighting for skirts to be included in NYSC uniform??? Instead of fighting for an increase in the allawee.

If NYSC approves skirts for the sisters based on morality, then they should approve bum-shorts for those who want them.

Who are those ones fighting for NYSC skirt???

Misplaced priority…
Instead of protesting for increment of your NYSC allowance you’re agitating for nonsense.
And even if this is be approved Na una go still cut the skirt to bum_skirt seducting innocent camp commander…
Nonsense and Ingredient…#FridayThoughts pic.twitter.com/5uVvZW9VoQ

Nysc isn’t a do or die affair, it has its own dress code and if you can’t adhere to it you can always apply for exemption even Jesus Christ said “give unto Caesar what belongs to Caesar” and part of being a good Christian is by obeying the laws of the land #Nysc pic.twitter.com/lamJEYrB9c