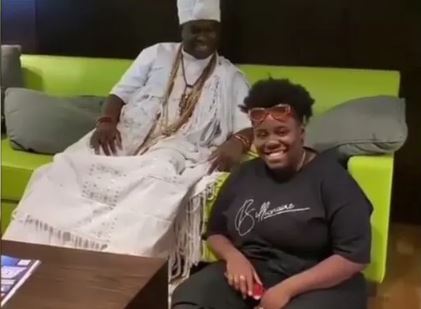 Nigerian Singer, Teniola Apata, popularly known with her stage name as Teni, has disclosed the real happening between her and singer, Wizkid.

Naija News recalls that Ayodeji Ibrahim Balogun, who is popularly known as Wizkid, was faked in a prank video made by hilarious and sensational Nigerian Prankster, Zfancy.
An event that fooled many fans of the celebrity who troop on the mall where the prank was setup.

Teni in a video she shared of her recent visit to the palace of the monarch, Ooni of Ife, Oba Adeyeye Adewusi, revealed that its only Tennis game she’s playing with Wizkid.

“We are only playing Tennis game,” she replied the Oba Adeyeye while responding to his question of whether he is her man.

It was obvious from the royal father’s look and respond that he is not supportive of the two having an intimate relationship. Naija News also understands that Teni alongside her team enjoyed a fun time in the palace, even that the king composed and sang a song which he insists that he features the singer.

Watch video of Teni’s interaction with Ooni Of Ife below;