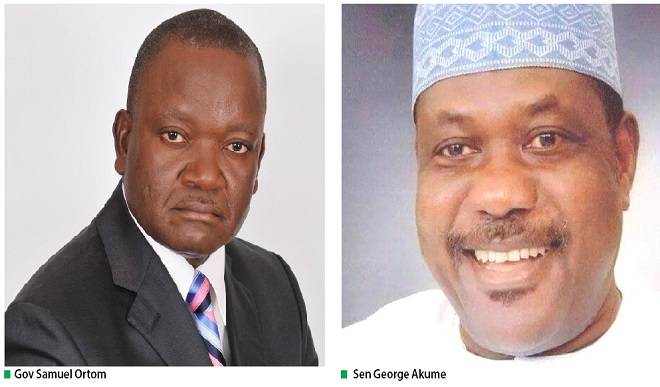 Samuel Ortom And George Akume In Exchange Of Words

Governor of Benue State, Samuel Ortom has dissociated himself from any form of attack on Senator George Akume, Nigeria’s Minister of Special Duties and Inter-Governmental Affairs.

Ortom revealed his position on Tuesday when he urged the Minister, who is also an indigene and former governor of Benue to stop blaming him for the backlashes he has been receiving after his verbal attack on the Tor Tiv, James Ayatse.

The governor’s statement is understood to be a reaction to the minister’s statement, accusing him of sponsoring some people, including the state caucus in the National Assembly to condemn him.

Akume, through his media aide, Aondona Mkor, had blamed Ortom for the condemnation of his attack on the Tiv paramount ruler who also doubles as the Chairman, Benue State Council of Chiefs.

However, the governor in a statement by his Chief Press Secretary, Terver Akase said he is not involved in any form of attack, verbal or otherwise on the Minister.

He said, “It therefore amounts to misplaced aggression for Senator Akume’s media aides to blame the governor for the negative reactions from Benue people regarding his derogatory comments against the Tor Tiv.

“The Special Duties and Inter-Governmental Affairs Minister ought to face the consequences of his public conduct and spare Governor Ortom of any blame.

The governor further carpeted the minister for what he described as his disrespect for the traditional institution in the state.

“As a prominent son of Benue who has occupied top positions including that of governor, Senator Akume didn’t need anyone to counsel him on the etiquette of showing respect for royal fathers.”

Ortom further urged Akume to stop taking out the aggression of losing the 2019 senatorial election against perceived political enemies.

“Akume is visibly angry with every Benue person since he lost the 2019 senatorial election and has raised a red flag against his imaginary adversaries.

“He has on several occasions called Governor Ortom unprintable names but the governor has chosen not to join the minister to dance naked.

“Akume’s recent attack on the Tor Tiv which has justifiably drawn the ire of the people only took his plane of insults to a higher altitude.”