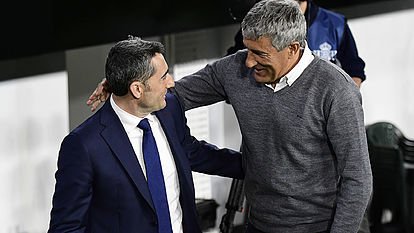 Naija News reports that Valverde, a 55-year-old man, was in charge of the Blaugrana for two years and eight months before being sacked on Monday night, January 13.

In an official statement on Monday Barcelona thanked Valverde “for his professionalism, his commitment, his dedication and his always positive treatment towards all that make up the Barca family,” the statement added.

During Valverde’s time in charge, he helped the club to two Spanish league titles, one Copa del Rey title and a Spanish Super Cup triumph.

However, unconvincing displays, complaints about playing style and shocking UCL second-leg defeats to AS Roma and Liverpool in 2018 and 2019 alienated him from Barcelona fans who then started the call for his sack with “#ValverdeOut.”

On the other hand, Valverde’s replacement, 61-year-old Setien, was until recently the manager of Real Betis, and led the Andalusian side to their highest finish since 2005 and to the Copa del Rey semis before leaving in May.

Setien has been linked to the club on several occasions as his football philosophy is similar to that of the Catalan side. He has a contract until June 30, 2022.