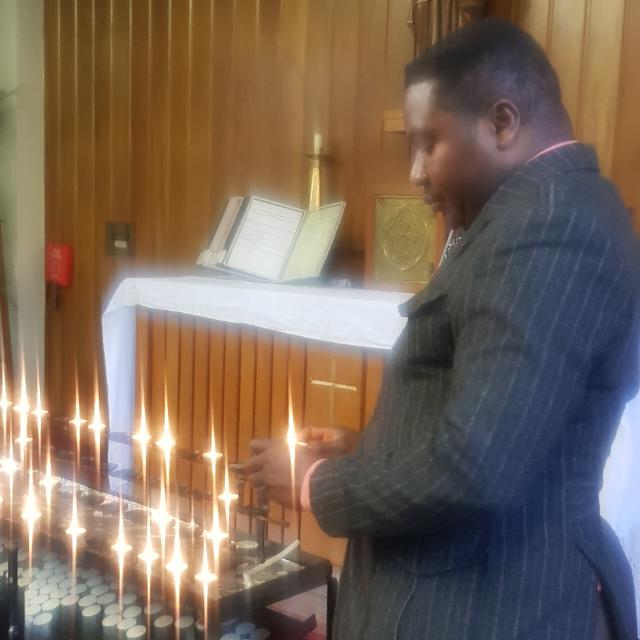 The anointed man of God, the President – Save Children of God (Jesus Saves), Mr. Ukachukwu C. Ukachukwu that prophesied the victory of some politicians in Nigeria and oversees lights up candles at St. Mary’s Catholic Church Sanctuary, Camberwell London, United Kingdom for Gov. Emeka Ihedioha’s victory and for the defeat of his opponents (The Diaspora’s Prayer Support). Lighting up candles to persuade Jesus Christ to continue to be with us as he is the source of all light. Our unquenchable light will continue to burn and shine as long as we keep to God.

Speaking in London, the United Kingdom, Gov. Ihedioha’s mandate is divine Just last night 10th of January, 2019 by 9.30pm while conducting prayers at Word of Life Church, Camberwell London. In the spiritual realm, he appeared to me. God handed him over double staff of office like Moses. Moses own was one but God gave him double, one on the left and one on the right hand. He was so glad, we started rejoicing and praising God. This is a clear sign of victory.

In another vision few days ago, I saw strong conspiracy against the Governor from APC. Few days ago in the spiritual realm, I saw APC in a gathering having a serious meeting plotting how to remove the Governor. There they were dragging power.

Immediately, they saw me around that area, one of them that mobilized the group started telling them that I am one in a million, a strong supporter of Governor Emeka Ihedioha and Owerri zone. That they shouldn’t talk about their plan until I move out of that place. This is the latest prophecy.

There is a conspiracy at the top and at the state to remove him but the Judges handling this election case should please insist on the truth if truly there is Independency of the Judiciary.

Recall that, the Angel of God that visited me in London before the Governorship Election declared him the winner of the 9th March 2019 Governorship election which I published on the 23rd February 2019 before the elections on Imo State Frontline Facebook.

On the other hand, the same Angel of God by 4.35 am on 26th May 2019 in Imo State at Owerri came and told me,” Oya receive a handshake, your man Hon. Emeka Ihedioha won at the election tribunal”. Thus, he won the Governorship Election Tribunal Judgement as published on Sun Newspapers online on 21st September 2019.

While writing about all these revelations, I sought the Governor’s contact to drop the message to him directly but my two friends from Mbaise could not provide it. I then published them online on Imo State Frontline, Ndi Imo Facebook page, Ngor Okpala Indigenes Facebook and on my Facebook page. Even dropped a message to the Lagos branch Nation’s Newspaper Editor – Mr. Sunday and his colleague Miss Victoria to publish which they said, it was not necessary but today, they have confirmed the message of God to be real. I still have the email I sent to them then. Everything happened as the Holy Spirit revealed.

Meanwhile, this is close to one week now that a lot of people insisted on hearing from me as an anointed man of God that prophesied the Governor’s victory in the elections and tribunal judgement. Perhaps, people are waiting to hear from me relating to what Fr. Ejike Mbaka said about the Governor. However, there was no prophecy. In Jeremiah 14:14, the Lord said, “I did not send them or appoint them or speak to them. They are prophesying to you a delusion of their mind”. Even though my ministry is on the pipeline which will emerge in Nigeria soon but I will only speak the truth as I heard from God.

Fr. Mbaka is a true man of God no doubt but here, he appreciated a man who graced his bazaar believing that if Hope Uzodimma should become the Imo State Governor, he will benefit more. That is his wish and what he is praying for. The intention is to throw a stone out to gather public opinion in case if the election is nullified for a re-run election between Hope Uzodimma and Hon. Emeka Ihedioha to indirectly gather support for his candidate.

Now, this has caused a lot of distractions in the state. I understand how Christians are feeling, is similar to what happened before the election when I released my prophecy for Gov. Ihedioha’s victory, majority of our people especially Christians joined us the winning side – even though the oppositions weren’t happy for declaring him the winner then. To the glory of God, he won the election.

Nevertheless, it is not good and advisable for a man of God to ever speak when God has not spoken. Frankly speaking, Senator Hope Uzodimma will not occupy that seat if everything is done in a free and fair way. In the spiritual realm, I did not see victory on his side. Even if they nullify the election and conduct another one with him and the Governor, he will definitely fail unless if there is malpractice. The chances of him taking over are not there. He is not a better candidate. Those trying to remove Owerri zone man from occupying that seat when it is their turn will not succeed. Conspiracy and proceeding to court or whatever the opposition are doing against Gov. Emeka Ihedioha’s divine mandate will not work. They should stop.

I am Ukachukwu meaning the word of God. Numbers 12: 6 said, “Hear now my words: If there is a prophet among you, I, the Lord will reveal myself to him in a vision, I will speak to him in a dream”.

Thus, I must speak as I saw it. We have been in prayers, Gov. Ihedioha from Owerri zone being there is a humble prayer answered, the only hope for the good people of Imo State. Imo people should not joke with this divine mandate; everybody should support whom God has anointed. Thus said the Lord.

Meanwhile, let me say it again, Gov. Ihedioha’s Mandate is divine, we need to guide it. What he needs more from us is our support and prayers, not distractions. I enjoin Imo indigenes to join hands in this new administration to rebuild Imo and make the State great.