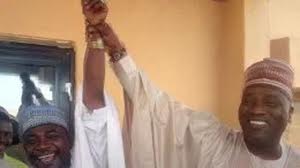 As the battle for the national secretary position of the All Progressive Congress, APC,continued to rage,  the North East zone of the party has finally settled for Ahmad Lawal.

Lawal is the  organising sectary of the party in Adamawa and is said to be slugging it with four others.

The north east vice chairman of All Progressives Congress,APC,Comrade Mustapha Salihu said that, ” in order to bring peace, unity and development, party leadership and other stakeholders have endorsed Alhaji Ahmed Lawan for National Secretary of the Party.”

Salihu  dropped the hint  on Friday  at Yola international airport while receiving the National Leader of the Party,Chief Asiwaju Bola Ahmed Tinubu who was  in Yola to witness the wedding Fatiha of Mallam Nuhu Ribadu’s sons.

There and then the party chairman lifted up hand of Ahmad Lawal to symbolise the endorsement amidst cheering supporters.

In his response, Lawal said his firm decision to aspire for the national secretary of the party, ” is because of the party’s manifesto of serving people without sentiments.

” I can assure you all that with your support, we will not disappoint Nigerians,especially party members  by giving our  best in making sure the party remains an unbeatable national party in ages to come,” he boasts.