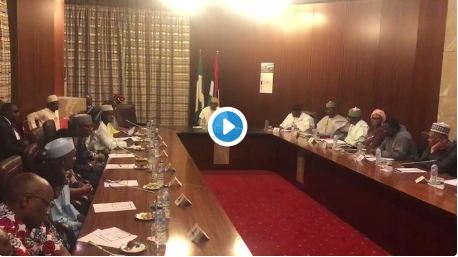 President Muhammadu Buhari is currently in a closed-door meeting with the leadership of the Academic Staff Union of Universities (ASUU) in Aso Rock, Nigeria’s Presidential, Abuja.

Naija News reports that the meeting was disclosed in a tweet on the micro-blogging site, Twitter, by Tolu Ogunlesi, the Special Assistant to the President on New Media.

The Presidential aide listed Minister of Education, Adamu Adamu and his Finance counterpart, Zainab Ahmed as part of the dignitaries in the meeting.

“ASUU meeting with the President this afternoon. Ministers of Education and Finance in attendance,” Ogunlesi tweeted on Thursday afternoon.

ASUU meeting with the President this afternoon. Ministers of Education and Finance in attendance. #AsoVillaToday pic.twitter.com/a8sa4Cbmae

Although the agenda of the meeting is yet to be ascertained, Naija News, however, understands that the meeting might not be unconnected with thePayroll and Personnel Information System (IPPIS), which the academic union was against.

This online news platform understands that President Buhari’s led federal government presented the IPPIS to ASUU but the leadership of the academic union is, however, insistent on staying off the IPPIS

Naija News recalls that ASUU had alternatively developed a solution called University Transparency and Accountability Solution (UTAS), which it claims is equivalent to IPPIS, but the All Progressives Congress (APC) led federal government is insisting on IPPIS.

Before this meeting, the Buhari government had directed all federal government workers to enroll in IPPIS, including members of the university community, a directive which was against by ASUU, with the union describing it as enslavement.