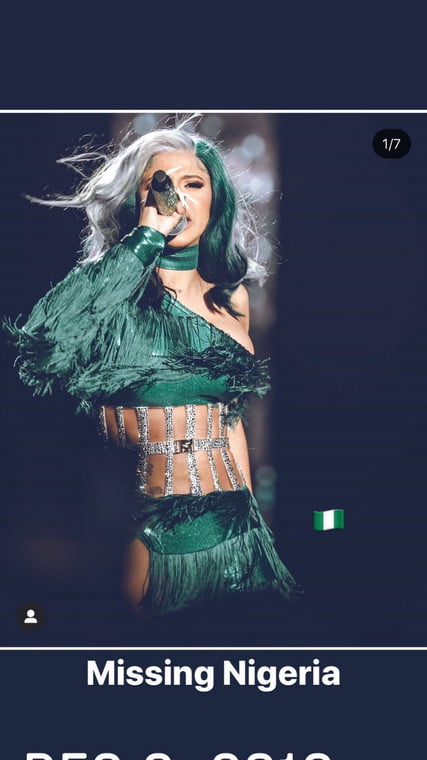 American award-winning rapper, Cardi B,  has once again come out with a  new request for her Nigerian fans to decide which name she should adopt between Chioma B and Cadijat.

Chioma B was coined for her from Davido’s fiancee, Chioma, during her trip to Nigeria last December while Cadijat is being pushed by her Muslim fans.

The rapper, who appears not to be slowing down in increasing her fan base in Nigeria, said in a tweet on Monday evening that fans should select a Nigerian name for her.

“Let’s settle this ones (sic) and for all CHIOMA B Or Cadijat,” she said.

Naija News recalls that her first request came in some days ago when the rapper who boasts a loyal fan base in Nigeria has revealed that she is toying with the idea of filing for Nigerian citizenship and wants her husband, Offset, to join her in relocating to Nigeria.

Just be answering both names, Nigerians that I know still have alot of names to give you. In my own part of Nigeria (Mushin), na cadijat omo elele we go dey call you.

If it’s not Chioma B. Please stay in America. How can you bear Cadijat? Girls named Chioma are usually fine and fair asf. It’s Chioma B. Or nothing ?

Does this look like an Igbo attire?? This belongs to the Yoruba culture. Please don’t angry me @iamcardib https://t.co/QtmzuAA3pU