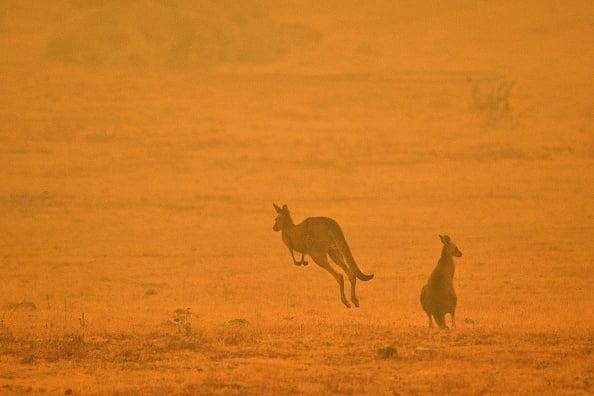 A kangaroo jumps into a field amidst the smoke of a bush fire in the Snowy Valley on the outskirts of Cooma on January 4, 2020. (Photo: SAEED KHAN / AFP via Getty Images)

Forest fires of unprecedented scale and violence devastating entire regions of Australia have claimed the lives of 24 people and “considerable damage”, authorities said Sunday after another bleak day by catastrophic weather conditions.

Hundreds of properties were destroyed and a man died trying to save a friend’s house, while the country experienced one of the worst days on Saturday since the fires started in September.

In the south-east of the country, the sky became black and ashes fell on isolated populations.

“We are in unknown territory, ” said Gladys Berejiklian, the Premier of New South Wales.

“We cannot pretend it is something we have already experienced. This is not the case. Several villages that had never experienced a threat of bush fire are at risk of being completely wiped out, ” she said.

State of emergency has been declared

A state of emergency was declared in the southeast of the island continent, the most populous region, and orders were given Friday to more than 100,000 people to evacuate to three states.

On Saturday, Sydney recorded record temperatures on Saturday, with 48.9 degrees recorded in Penrith, a western suburb.

Australia’s most populous city, with more than five million people living in its metropolitan area, is threatened with power outages after two substations are destroyed by fire, and authorities have called on residents to limit consumption electricity.

In Canberra, the temperature has reached 44 degrees, an unprecedented figure, according to a spokesman for the Australian meteorological services.