When reading the accomplishments of this young woman you will understand why the Future African Leader’s Awards are a fundamental part of the New Year’s Eve Service.

The FALA segment of the New Years’ Eve Service with Pastor Chris Oyakhilome is one of the most edifying and uplifting events in the calendar of LoveWorld. Pastor Chris told the expectant audience that ” we built this segment into the topmost meeting we have in the year, so the young people know just how important they are.”

Nobel Laureate and former President of Liberia Ellen Johnson Sirleaf was the special guest of Pastor Chris Oyakhilome. She was invited to address the global audience and announce the name of the Star Prize winner.

Host Pastor TT Edum narrated the details of Babiene’s achievements. She is a 22-year-old activist from Cameroon, and she is passionate about seeing young people reach their potential. Her enthusiasm for youth empowerment had led her to host a six-week skill acquisition workshop as part of the Leadership Initiative Awards scheme of FALF. This led to hundreds of youths developing skills in catering, fashion design, soap making, carpentry, and hairdressing.

Her sense of justice and zeal for the youth empowerment that saw her train hundreds of young people to acquire relevant skills for economic independence she extended this to over 200 physically challenged persons. She wants to equip the disabled for a life of self-reliance, development, and independence in a program called disabilities of the mind. They received training in the art of manicure and pedicure, phone repair, makeup and computer maintenance. She awarded the top three candidates in each category cash prizes worth of over $2,000.

Risking her life to help others

She has visited 35 refugee camps in Nigeria helping improve the plight of the Cameroonian refugees there. There are some 8,000 refugees living there. She distributed food, personal hygiene items, and school materials to help alleviate suffering. She supplied medicines worth over $700 dollars to treat childhood ailments. She paid for the successful surgery of two orphans who had lost their sight due to cataracts in association with ‘Doctors without Borders.’

She took steps to improve the living conditions of Cameroonian during the worst social-political conflict Cameroon has ever witnessed. Cameroon has seen the emergence of the militias party fighters who are determined to oppose the government by stopping the children from going to school. She was so concerned than an entire generation of youth will be lost without the education she was moved to act.

She was abducted, beaten and held in captivity. This left her paralyzed and using a wheelchair. On her recovery, she was undaunted and returned to her work working on behalf of and vulnerable in her nation. She was awarded the Star Prize for her vision, for her courage for her leadership. 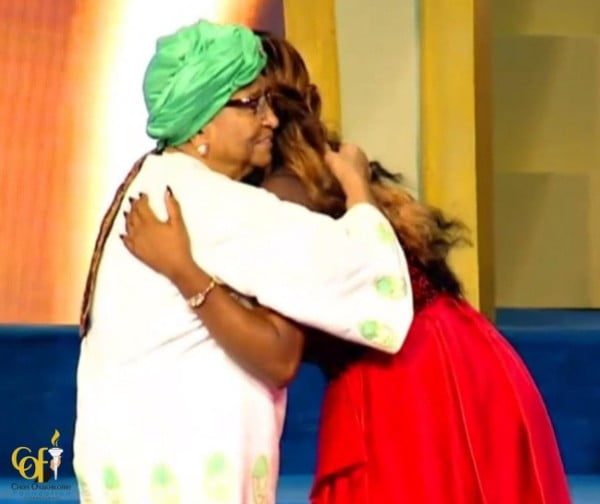 As she ascended the stage this brave woman was applauded and honoured for the by the millions of viewers around the world. As Ellen Johnson Sirleaf embraced her it was a sublime moment of mutual affection.

FALF has reached across the continent of Africa

When the former President of Liberia said, “I looked at the many activities of those in their countries and those that go beyond borders.” This is impressive and course altering. One of the key elements of the New Year’s Eve Service was about impacting the lives of others. She praised the winners saying, “you’ve been able to promote activities and change the lives of others,” This sentiment reflected in the words of Pastor Chris Oyakhilome, “you will never have fulfilment until you live for other people.”