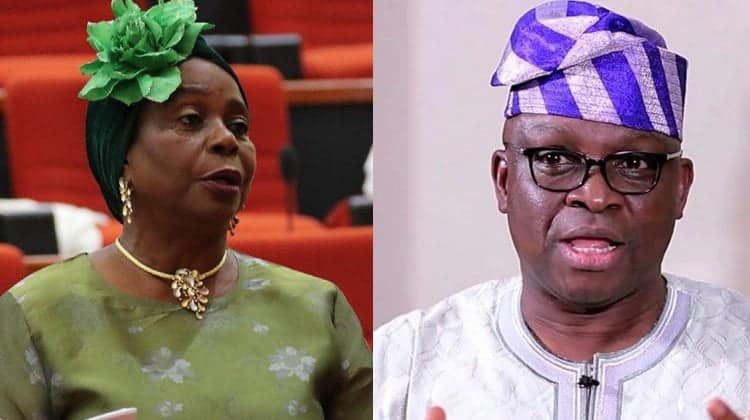 The Senator representing Ekiti South Senatorial District, Biodun Olujimi, on Friday noted that she has accepted the apology of the former governor of Ekiti State, Ayodele Fayose.

The lawmaker further stated that the Peoples Democratic Party in the state needs genuine reconciliation and unity of purpose to forge ahead.

The former Minority leader in the Senate added that she has no hatred against anybody within the party, she charged the leaders of PDP in the state to reach out to aggrieved members of the party.

Olujimi who spoke in Ado, the state capital, during a meeting with the leaders of the party at the party secretariat said, “Fayose has apologised and who am I not to accept it? We are all on the same page and shall work together as long as he would be ready to submit to the supremacy of the party constitution.”

Recall that the former governor of Ekiti apologized during a meeting with some PDP leaders at his Afao Ekiti residence.

Fayose in his statement said, “Senator Olujimi, Senator Duro Faseyi and Chief Gboyega Oguntuwase should not be angry. I am sorry if I have offended them.”

Olujimi called on the Oguntuwase-led PDP State Working Committee to constitute a reconciliation committee that would reunite aggrieved members and move the party forward.

She said, “The party cannot move forward under an atmosphere of crisis, hence the need for unity and love among members so as to build a strong party.”

The Lawmaker donated a Toyota Hiace Bus to the party, a Toyota Camry car to the state party chairman and cash to party leaders, chairmen and youths across the 16 council areas.

Olujimi had earlier at a thanksgiving service at the St. Paul’s Catholic Church, Omuo Ekiti, donated N5m to the church.